It is only the beginning of February and although the groundhog didn’t see his shadow, the cold weather may still be around for a while. University of Akron students can rest assured knowing that if a storm comes, whether it is rain or snow, that UA is prepared. 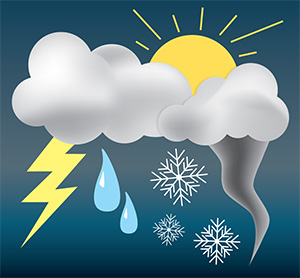 The University of Akron was recently given the distinction of being named a StormReady university by the National Weather Service.

According to its website, the StormReady program was started in 1999 in Tulsa, Okla., to help communities be better prepared when storms hit.

“StormReady communities are better prepared to save lives from the onslaught of severe weather through advanced planning, education and awareness,” The StormReady website said. “No community is storm proof, but StormReady can help communities save lives.”

The University of Akron is one of 126 universities to be named StormReady in the U.S., according to the StormReady website. UA is one of just five in Ohio, including Ohio University, Sinclair Community College, Wright State University and Xavier University.

“We are the only university in northeast Ohio to have it,” said Mark Beers, the emergency manager coordinator for the UA Department of Environmental and Occupational Health and Safety.

The goal of EOHS is to ensure a safe environment for faculty, staff and students at UA.

According to the Stormready website, the criteria for being given the title of StormReady includes having an emergency operations center, having more than one way to receive National Weather Service Warnings, and alerting community members with warnings in a timely fashion, among other guidelines.

Beers said that one element UA has that keeps officials up-to-date on local weather is a virtual weather station on top of the Polsky building. The University also employs people who are trained to look for severe weather, like tornadoes.

“Education, notification and being able to predict the weather all play into being StormReady,” Beers said.

According to Beers, this is not only an honor for UA, but it should also give students more confidence to know that their campus is prepared if severe weather were to strike.

“It shows that we care about preparedness,” Beers said. “We want to make sure that we’re ready for not just winter storms, but any type of storm.”

Because it is winter, Beers said that officials at The University of Akron are watching many different factors to keep up with what’s going on around campus. For instance, he said that they monitor road conditions, temperature and wind chill factors to determine whether or not to close school.

Beers advised that students stay informed, too. He suggested that they keep track of weather in the area and sign up for Z-Alert, an emergency text-messaging service that alerts students who have signed up for it of class and event cancellations around campus.

Among his other tips were to keep emergency supplies in your car and dress appropriately; Beers said that he saw one person walking around campus in shorts during the recent cold weather.

“Common sense is the name of the game when it comes to emergency preparedness,” he said.

UA does not plan to stop working on its emergency preparedness plans now that they have received the title of being StormReady. Beers said that they are currently working on a new lightning mitigation program, which only one other university in the country has implemented. The program mainly affects sporting events and the steps taken to ensure
the safety of attendees when there is lightning in the area.

“We have a really good program for football and soccer. We just want to expand it out to the rest of the outdoor sporting events like baseball and softball,” Beers said.