Afrika steps onto our stage

This past Thursday, the members of Step Afrika visited The University of Akron for an upbeat and lively performance at EJ Thomas Hall. Aside from entertainment, the company provided the audience with not just an energetic, artistic show, but also a lesson on African culture and traditional step-dancing. 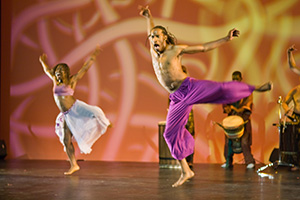 Step dancing, or stepping, is a form of dance in which the human body is used as an instrument, involving clapping, footsteps and chants. Stepping began in the early 1900s in African American fraternities and sororities; however, since then, it has become increasingly popular among young people of all ethnic backgrounds.

Step Afrika serves as the first professional stepping company, formed in 1994 in Washington D.C. According to stepafrika.org, Step Afrika has traveled not just in our country, but in Europe, South America, Africa and Asia as well. In the U.S., they tour from Maine to Mississippi annually, where they perform at college campuses, and have even hit the White House and stages in New York City.

Thursday night’s show was anything but an ordinary performing arts extravaganza. The performers did not rely on pre-set music or recordings for assistance. In fact, the only sound generated to the audience was through their own word of mouth through mantras, stomping and clapping, and original beats using Djembe drums. 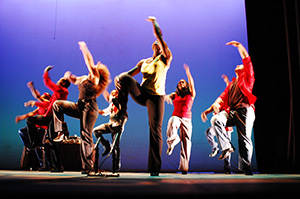 Aside from the theatrical elements, the audience can pick up on other ways African culture is infused into the show.

“The spirit of community is really important. Our organization was born as a cultural exchange, which we feel opens doors, so we encourage audience participation,” said Jakari Sherman, the artistic director.

In the first 10 minutes, there was already a handful of people, ranging from elementary-age youngsters to college-age students, on the stage learning basic fundamentals of the art.

The audience watched as the performers instructed the volunteers, in a humorous yet patient manner, how to perform these unfamiliar dance moves.

The audience was also given a brief history lesson on the origins of stepping through a skit-like act. The skit demonstrated that the art of stepping traces back to South Africa, where it is sometimes called gumboot dancing. According to teensstepup.com, gumboot dancing refers to wearing Wellington-style boots, which were the only suitable footwear for the African American workers in gold mines. The miners wore bells on their boots to communicate and signal with one another, as there was a strict no-talking rule in the harsh mines.

Another characteristic that made this performance so moving to watch was the simplicity of the visual appearance of the stage. There were no dramatic lights, props, costumes or make-up because they were not needed to make the performance successful. To glamorize African stepping would contradict what the organization is really about and the struggle of their ancestors. In presenting their show in this raw form, it illustrates to the audience that they are truly authentic step-dancers who are nothing but passionate for what they do.

“It was a great show! It was very funny, enlightening, and surprisingly educational too,” said attendee Valerie Boone.

Step Afrika is something that everyone should experience at least once. The combination of creative dance with storytelling and constant audience participation make for a show that will surely leave audience members amazed and with a newfound knowledge of a culturally rich group of people.