UA theatre instructor Aubrey Caldwell Davis wanted to ring in the New Year with a special celebration: her wedding.

“I always hated New Year’s Eve because I always had to work and watch everyone else have a good time,” Caldwell said. 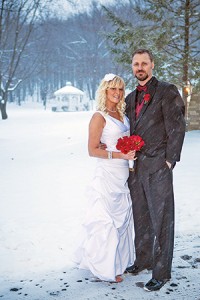 Caldwell Davis and her husband, Jeff Davis, decided they wanted to change that and planned a New Year’s Eve wedding celebration that complimented both of their personalities.

Their 10 minute ceremony was held in a log cabin in Waynesburg, and a grand party to celebrate their new union immediately followed.

There was something very important that Caldwell wanted to incorporate into her wedding: her theatre students.

As Caldwell walked down the aisle, 15 of her students staged a flash mob to the song “Marry You” by Bruno Mars.

Theatre student Sam Ost said that Caldwell got the idea for the flash mob from an episode of “Glee” in which the students walk two glee club members’ mother and father down the aisle as they sing and dance to the song “Marry You.”

“As a student, you don’t usually get to be present at such landmark moments in the lives of your current professors. Being included at this moment by Aubrey showed me how important she considers her students in her life,” Ost said.

Caldwell walked down the aisle in a dress that she described looked like flowy snow. 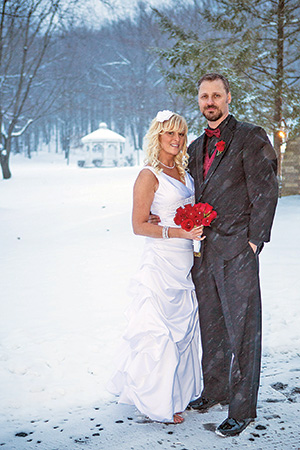 “Seeing her walk down the aisle was wonderful, but even better was seeing the look on Jeff’s face when he saw her coming. He looked like he knew exactly how beautiful she is, inside and out, which is what we as students get to experience every day we go to class with her,” Ost said.

Theatre alumnus Miranda Roth said she felt happy to see Caldwell walk down the aisle because of the strong connection she has with her and her students.

“To see Aubrey walk down the aisle, I couldn’t help but feel happy for her: She is beautiful, a rock star, amazingly caring, and totally deserving of love and someone to share life with,” Roth said.

Roth said that Caldwell has impacted her life in ways she probably doesn’t even know.

“She’s admired by all, totally okay with being herself, and she truly does care about everyone that she comes in contact with. She isn’t afraid to share real feelings and her story with us, to go deeper in relationship with her students. I think that’s an admirable characteristic that has her loved by all the people that know her. I’m grateful to know her and know that she is always there no matter the space or time. She’s just that kind of person,” Roth said.

“She is not only an amazing teacher, but she’s such a great person who truly does care for us and she does everything she can to help us succeed, so to be able to watch her walk down the aisle and succeed in something that makes her happiest, was beautiful. Seriously, being in her wedding was so much fun and something I’ll never forget,” Briski said.

The groom, Davis, said that he felt proud and happy to be sharing that moment with the one he loved.

“Her impact looms large…she still has the passion and spark to do the things that she loved doing as a youth. She gets these kids and how they think, and pushes them to be their best, she is very much a perfectionist at her craft so she will always push them to try and be the same,” Davis said.

Caldwell and Davis got engaged on July 20 after she finshed performing for thousands of people with the Buckledown Band at the Pro Football Hall of Fame in Canton.

Davis had driven to Pittsburgh that day to purchase a Tiffany’s engagement ring for her.

“I had the ring in my pocket for hours, waiting for her to finish a show with the band at the hall of fame balloon festival,” Davis said. “After the evening’s festivities were done we went home and I quietly asked her to marry me, nothing flashy. My curse is that I’m not a flashy/big production kind of guy. That is her forte. She does the attention grabbing, I do the hiding in the corner of the room; it works for us.”

The couple met on Facebook in 2010 after Caldwell moved back to Ohio from Austin, Texas to teach at The University of Akron.

They spoke for three months and then began dating.

“I knew from the first moment I saw him that there was something there,” Caldwell said.

Davis and Caldwell have both been previously married. Davis has two children: Tucker, 16, and Zack, 14, who were both part of the wedding.

Having her students in her wedding was very important to Caldwell because she doesn’t have any children of her own.

“In my mind, my kids got to be in the wedding too,” she said. “I was almost in tears as I walked down the aisle. Those are my kids and they made my day so special.”

Caldwell said she realized the very first day she taught at The University of Akron that she finally found a place where she belonged.

“I have worked many thankless jobs,” she said. “This is the first job where I feel that I belong and am appreciated. All teachers want is to connect with their students. When you invest in your students and make their accomplishments your accomplishments, a connection is made.”