Cabaret Company returns with the circus 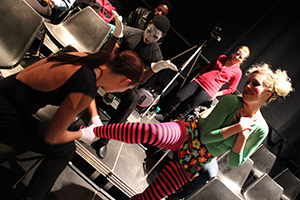 The show, directed by Rosilyn Jentner, consisted of a group of dysfunctional circus members, who throughout different circus acts, portrayed themes of human life such as love, regret, companionship, murder, and courage. The group of actors, dancers and crew put together most of the play within the short time span of a few weeks. That alone I found impressive, but what was even more outstanding was the amount of chemistry the actors had with each other and how smoothly the production transitioned between acts.

Altogether, there were 15 circus acts. The group of actors and dancers performed 15 well-renowned songs from different Broadway shows, movies, singers, etc. that all represented a theme of human life.

“I really enjoyed the performance; I was impressed with all the actors and how quickly they put everything together,” said attendee Rosheeda Bryant. “I really thought they did a good job and that everything came together well.”

In my opinion, the two actors who stood out the most were Alyssa Whiddon, the Love Interest, and Brittany Dolinar, the Emotional Wreck. Both of their voices were strong and carried a perfect combination of vibrato and emotion. Their acting skills, along with their singing voices, are what really made the show for me. I still get chills thinking of Dolinar’s emotional number when she sang “Now” from Dreaming Wide Awake; her body language, added with the emotion she sang with, completely shifted the atmosphere of the room to that of a darker and hopeless feel.

Julien Huntley, casted as Yellow + Blue, was another great addition to the group. His smooth and soulful rhythmic style really drew in the audience and made them forget that they were watching a play. The combination of his guitar and vocals really gave his singing numbers a genuine, raw feel of expressed emotion. 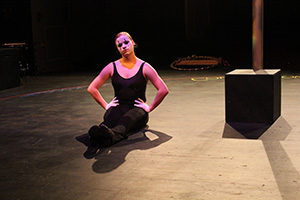 I must say, out of the dancers, I was most impressed with Kweku Bransah, who was the sole male mime and dancer. His incredible jumps, perfectly landed back-flips and poise made him stand out amongst the others. His timing on all of his moves and acting were spot-on and impressive to watch.

Personally, I found the mimes to be a bit overkill. However, that’s probably due to the fact that I very much enjoy my personal space, and they had no hesitance getting right up in the audience’s faces.

Before the show began, the mimes would go into the audience and sit next to audience members, put their face right next to the audience member, and stare at them for an extended period of time. Despite the invasion of personal space, I thought the mimes did a great job of dancing as well as being facially expressive to portray emotion, feelings, and actions. In fact, they may very well have had the hardest roles, considering they had to dance and act only using facial expressions and body language since they couldn’t talk.

“I thought the mimes did a great job. I was impressed with how they were so facially expressive while also pulling off multiple dance moves,” said UA freshman Gabriel Nkemeh.

Overall, I was very impressed with the Theatre Guild’s performance and feel that their efforts should be recognized. I will undoubtedly be going to their next show in anticipation of what songs, acting and dance styles they’ll throw in to execute another great performance!