Where have the powerful and independent gone? Ladies, do you not see the shame being brought upon the fairer sex by contemporary television? The examples of sexism in television programs are seemingly endless. It is time to open your eyes and refuse to be subliminally caught in the cookie cutter idea of the 21st century woman. Women are more than airheads with boob jobs. 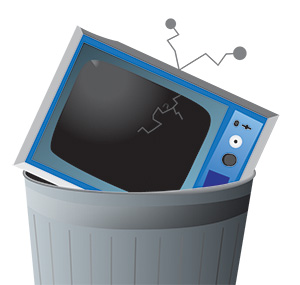 You could be a reality TV junky and only watch Bravo or TLC. Bravo is the mecca of all things wrong with this country. Let’s examine some of the evidence. Clearly, the worst offender on Bravo is the Real Housewives series. ”Real” housewives are taking over the country, and coming to a town near you. They live in New Jersey, New York, Atlanta, Orange County, even Washington D.C.

These shows have set back the progress women have been fighting for decades to implement. They whittle down the idea of powerful, independent women into raging alcoholic, plastic shells.

Their faces don’t even move when they take out their anger issues on anyone within earshot. Their boobs are probably as hard as their heads. It’s embarrassing that women are being paid to act as outrageously as possible, and we watch it every Monday at 9 p.m. Eastern Standard Time.

These women have a platform to spread a message of strength and intelligence, to show that the female sex is just as capable and powerful as any man.

What would you do if you had millions of captive viewers tuning in to watch you every week? Would you throw drinks on people, swear like a sailor, and shake your booty like you’re still 25 while hired help cares for your children? I certainly wouldn’t. As a woman, I hold myself to a much higher standard than that.

I’ll give Bravo a rest; now I can pick on TLC. TLC is like that drawer you have in the kitchen full of random stuff. There are some twisty-ties, batteries that may or may not work, a pair of old scissors that aren’t exactly sharp anymore, and maybe some super glue that has now leaked and stuck to paper napkins you don’t even care enough about to throw away.

Some of the gems hidden in the TLC box include 18, I mean, 19, or 23, “Kids and Counting.” That woman has spent the better part of her life pregnant. How irresponsible and embarrassing. How do these people think that large of a family is fair? How could they possibly provide full support for every one of those children?

How unfair to make your older children take care of younger children when they should be learning about who they are as individuals and taking their time to grow up, not wiping baby number 47’s bottom. Must we really shove this woman into the pigeonhole of baby-maker and enjoy it? How is it entertaining to see a woman so brainwashed that she would subject herself to that kind of a life?

And the social cost of a family like this is remarkable. With overpopulation and increased pollution, one has to ask just how big is the Duggar’s carbon footprint? What kind of ratings do you think this show would get in China amidst the children of the one child rule?

Then there comes “Dance Moms.” How anyone can stand more than 10 minutes of that show is beyond me. It is almost painful to see these middle aged mothers squeeze themselves into a halter top and sit by, mindlessly, while their children are berated by an obese voice box. The word embarrassing comes to mind once again.

Seeing these women pine for their prime years is just sad. Their youth and beauty are gone, so now they are living vicariously through their preteen daughters. It’s sad to see these mothers wipe away their daughters’ tears and tell them to keep pushing.

What kind of example are these women giving to their children when they fight with each other and are paying a woman to punish their young and impressionable little girls?

When you think about it, it’s kind of creepy. I don’t enjoy watching 10 year old girls dance in leotards while their mothers imagine it’s their time to shine in the spotlight. Why would anyone enjoy watching a little girl cry after an adult yells at her for not jumping high enough or missing a step?

This is just reinforcing the idea that girls are meant to be pretty and follow the rules. Do you see any shows about young boys? Would that cross the line of too creepy? Is the next series going to be about the top karate school where dads yell at their sons to punch harder? “Kill! Kill! Kill!” That would be fitting, right? If your DVR records “Dance Moms,” how could you disagree?

Another travesty is “Teen Mom” on MTV. I think enough has been said about this series, but in case you’ve forgotten, each episode slaps the face of every American female. Teen and young adult pregnancy out of wedlock is seemingly an epidemic. I have a theory that in 20 years we will be talking about the baby boom of 2012.

I’m really not trying to repeat myself, but by now you must see a pattern. These girls are just falling into the pattern of being homemakers and baby makers. One teen mother, Chelsea, was too incompetent to keep her dog alive. Is it entertainment, or fear for her baby’s life, that keeps us watching? What a shameful misrepresentation of the power and beauty of motherhood.

And “Extreme Couponing” just keeps on lowering that glass ceiling. How thrifty of these wives and mothers to get good deals on groceries for their family. Every coupon they clip is one more stone to the barricade keeping women in the kitchen.

Another less obvious offender is “The Big Bang Theory.” This hilarious show, you may say, does not fit in a category with the aforementioned programs. But what about this show is funny? It’s the juxtaposition of the main characters: four genius, socially awkward scientists and their sexy but stupid female

The two other female characters are also genius scientists. However, they are also frumpy and socially awkward. How can any woman not be offended by the blatant sexism the show pours on in every episode?

Another favorite is “Law and Order: Special Victim’s Unit (SVU).” I mean really, does anyone actually like the other Law and Orders? “SVU” takes the cake by far. But why is it that the most loved “Law and Order” repeatedly shows heartbreaking scenes of women having to deal with one of the most terrible situations one could be forced to endure?

Do you really just want to see Stabler kick some perp’s behind, or is just easier to leave women in their place of being sex objects and weaker than men? Have we become so saturated with the stereotypical male and female roles that what we prefer to watch is women being raped and beaten with a heroic male figure swooping in to protect them?

When you get down to it, this show is subconsciously putting women in our mind’s eye as weak and as victims. Of course, the show also highlights the power of women to overcome impossible situations and take revenge against their oppressors, but at what cost? Why does America enjoy watching women be brutalized as, essentially, a form of entertainment?

All I am saying is it’s time for America to turn off the TV and move
into the 21st century. Whatever happened to powerhouse Ally McBeals of the late ’90s?

It’s time for women to take a stand and demand to be represented and respected as the intelligent, powerful and beautiful members of society that we are. It is not entertaining to watch women be demoralized and humiliated. Our ancestors fought too hard for us to let our integrity be burned at the stake in the name of entertainment.