When Victoria Barrientos came to The University of Akron from Fort Bragg, N.C., she had no previous experience with college life.

“I only knew one person in the whole state, much less the college,” she said. “I had to figure out how to get my benefits going so I could continue to pay my bills and figure out how and where to go on campus for classes and resources.” 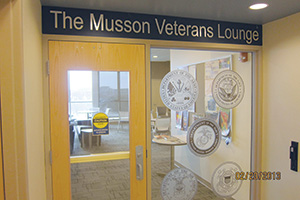 Barrientos is just one of the many veterans on campus who have felt this way when coming to college. The University of Akron works to provide these veterans with an easy transition from military life to college.

According to Mary Rossett, the associate director of military services, there are 885 veterans on campus collecting Government Issued (GI) benefits. Rossett also said there are approximately 400 veterans on campus that are not collecting benefits for various reasons, such as failing to register as a veteran with the campus, or exhausting their benefits.

According to Barrientos, who is now president of the Military Veterans Association (MVA) on campus, it is not easy for veterans to adjust to campus life. She said that for many veterans, this change can be intimidating.

The University of Akron does supply veterans with many opportunities for assistance, like help through its Military Services Center. Located in Simmons Hall, the center’s mission is to provide enrollment help and other services to veterans on campus.

According to information from the Office of Admissions, UA also waives admission fees for veterans, has veteran-specific orientation programs, and provides procedures to accommodate short-term activated military members.

There are also opportunities for veterans to get involved around campus, including the MVA. Barrientos said that the one of the best things the MVA does for veterans is help with networking.

“It provides a support network for veterans so that should they need help in a difficult time, they will be able to reach out to other veterans,” she said. “Having a functioning network in place can prevent suicide, DUI’s and academic failure.”

She also said that many veterans are used to using the battle buddy system, which pairs soldiers up to assist their buddy in and out of combat.

“Most military people are used to the battle buddy system and in it, if your buddy is out drinking and cannot drive, then you go get them if you are sober,” Barrientos said.

Travis Thompson, a senior at UA, said that attending college led to some adjustments for him.

“Adjusting to college life has presented me with a few unique challenges. Relearning how to study and prepare for classes was at times difficult,” he said. “Having to get home from a long day of classes and still having to find time to study, make dinner, work, and try to make new friends was hard. The army life was in a sense more structured: wake up, work out, go to work, and then you were on your own time.”

Thompson enlisted as a combat medic and was stationed in Germany for three years. He was deployed to Iraq from 2007 to 2009 to support Operation Iraqi Freedom.

“I was accepted in to Army’s green-to-gold program in 2009, which allows me to attend the University of Akron as an ROTC cadet,” he said.

Thompson said that he has tried using some UA programs like Adult Focus, but they did not work too well for him.

“I got the impression that their services were geared more towards a much older adult learner with family and other obligations,” he said.

Thompson joined the MVA in 2010, which helped him become more active around campus.

“The MVA offered a network of fellow veterans with similar experiences for me to interact with,” he said. “They helped with transferring my military training for university credit and provided an outlet for other concerns.”

For more information on the services for veterans on campus, visit uakron.edu/veterans.