The Chippewas are 2-10 in conference play and have lost every single game they’ve played against Akron and Ohio. For the rest of the season there is nothing to play for, other than respect. Do not expect CMU to be in the tournament. 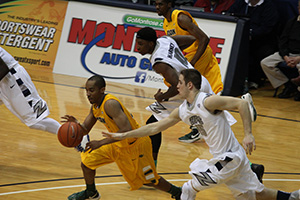 Northern Illinois has been absolutely atrocious this season, only winning five games, with three left to play. Don’t look for the Huskies to do anything impressive in the last two weeks of the season because it isn’t likely to happen.

Though the Redhawks have won a few more games than both CMU and NIU, there isn’t much reason to expect that they will do anything impressive in the last two weeks remaining in the season.

Unfortunately, it’s the time of the year that we should consider giving awards to the teams that just didn’t have what it took to get anywhere significant, but gave us some fun anyways. Toledo did give Akron a run for their money earlier in the season, but ended up losing 71-62. Better luck next year, Redhawks.

What is there to say about a team that lost to the University of Indiana-Purdue Fort Wayne Mastodons? If you’re losing to a team no one’s ever heard of, it doesn’t bode well for your championship aspirations.

Eastern Michigan does not play well in football or basketball. The Eagles are 12-15 in overall play, so don’t look for them to make any huge splashes this year.

Though Kent State has been having a rough season within the conference, the Golden Flashes were able to pull of an impressive win against Loyola (Ill). After lagging behind Loyola by 15, the Flashes rallied to a 70-63 victory in the second half. There is a chance for Kent to make some magic in the conference tournament, but don’t look for them to be the champion.

Buffalo stands a good chance of upsetting Akron this weekend, if Akron does not adequately prepare itself. The last time the two teams met this season, Akron fell behind Buffalo 30-10 and was still able to win the game. The Zips must prevent falling behind by that margin in a hostile environment.

Toledo is currently tied with Western Michigan, but they have had no impressive wins this season, losing to each of the top three teams. Toledo will make a conference tournament run, but does not look likely to be the champion.

Ohio had a terrible weekend, losing their BracketBuster game to Belmont 81-62. Ohio looked shaken and nervous, and played a completely horrible game. Perhaps Ohio was looking forward to their game against Akron, but things don’t look well for the Bobcats. Ohio only managed to shoot 39 percent on the night and was held to less than 20 points off the bench. Akron would be wise not to overlook Ohio, but there is a chance that the Zips could sweep Ohio in the regular season.

Akron is currently the most elite team in the MAC. The Zips have advanced their winning streak to 18 games and they won against their BracketBusters foe North Dakota State University. The true test for the Zips will be on Wednesday when they face Ohio in Athens. All four of Akron’s losses occurred during away games, and the Bobcats remain undefeated at home.