The University of Akron Theatre Program will premiere the French farce “A Flea in Her Ear” tonight at Sandefur Theatre in Guzzetta Hall. 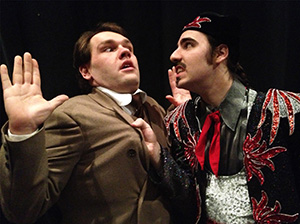 The play was written by Georges Feydeau in 1907. 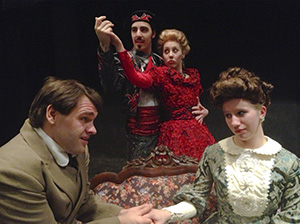 Feydeau set his play in Paris, France at the start of the 20th century.

“A Flea in Her Ear” tells the story of Yvonne Chandel as she tries to expose her husband’s alleged infidelity. She enlists her best friend to help her try and trap him. The situation spirals out of control when a case of mistaken identity and a crazy Spaniard are thrown in the mix.

“The actors have been working so extremely hard for this show. With a farce, timing is everything, so that’s what they’ve been focusing on and it’s definitely paid off,” Briski said.

Briski said she has enjoyed being part of such a hard-working production team.

“The crew is amazing and we’ve been working harder than I have ever experienced at Akron. This show has two different sets we have to change over during intermission and it’s hard and terrifying. We’ve been working as hard as we can to make it smooth and efficient,” Briski said.

UA graduate student and actor Chris Simmons said that this is a show that is sure to win audience members’ hearts.

“Audiences will love this show. We have not done a show like this at UA while I have been around. It is absolutely over the top hysterical and audiences will be coming back to see it again. I am so excited to be a part of it,” Simmons said.

Simmons said the performances of his fellow actors are “just brilliant” and hilarious.

“It is very hard as an actor to keep a straight face in this show,” Simmons said.

Briski said the cast and crew are ready for opening night.

“The show is ready. The actors are great and the crew are determined and focused to make this a great show. It’s definitely ready for an audience to come and experience something Akron hasn’t seen in my five years here,” Briski said.

Briski said “A Flea in Her Ear” is a hysterical, intriguing and technically magical show.

“It’s a great show and the audience won’t know what hit them when they walk into Sandefur,” Briski said.