I should have had a V8

Back in the 80s, there was this innuendo-ridden movie with Rodney Dangerfield and Robert Downey Jr. called “Back to School.”

It centered around an older, uneducated man who decided to grab a degree as a show of gumption for his son. 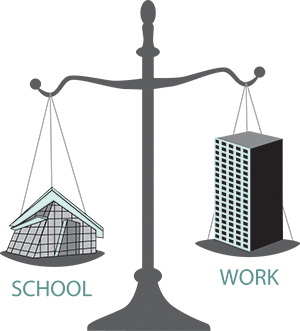 He was wealthy, of course, so there was just a lot of raucous debauchery where poetry majors helped him with his Longfellow. It was quaint, really.

Yet, for those of us who are not wealthy, and have taken that giant leap back to school, the most debauchery we exercise is foregoing a V8 in favor of a Twix on our mad dash from work to class.

Unfortunately, my work is one of those pesky 8 a.m. – 5 p.m. jobs, so dashing to that 5:20 p.m class is indeed a tumultuous affair. By the time I finally pirouette my car into a spot, get flipped off by several equally-dashing drivers, dodge speeding cars on my sprint to class, and land in a seat designed by the Marquis de Sade, I’m already spent.

And that’s after I slaved away on lines of code for nine hours. Those in the same boat as me, I salute you; I also suggest a hearty dose of liquor, or some other relaxing libation, at the end of the week.

People who do this and have children, single parent or otherwise, you deserve a medal. Clearly, it’s a crazy idea to work and attend school, both full-time. But, if you can pull it off without losing your mate, your sanity, your job and your hair, then you’re doing OK.

You should also consider a day at the spa or fishing, or something, as often as possible. Maybe a lobotomy.

Going to college straight out of high school, or even after a year’s hiatus, is not on par with this foolishness. It’s not even close. I’m in my fifth year of doing this, spanning two different schools, and the issues I hear from the younger students typically revolve around their parents, their part-time job woes, or their unsympathetic professors.

I feel for you. Really. It’s unfortunate, but true, that not everyone has that opportunity to jump right into education after high school. Some of us have to make that difficult decision, distinguishing between living and learning.

And, point of fact, if you can’t support yourself, then that slip of paper bearing your degree is worth about as much as soggy toilet paper.

So, it is thus that I fall into that category of a non-traditional student: someone who is over the age of 25, has multiple “life roles,” and is beginning/returning to school after four-plus years of employment. That’s me. That’s my title. Does it mean a damn thing? Not one.

Why? Well, let’s consider this. Some of us in that group also have a day job because we couldn’t afford an education otherwise. We’re nighttime learners, so we have this extremely narrow list of courses from which to pick, most of which are only offered once each year, and all of which have a very unappealing duration.

Sure, I like sitting in a lecture for 2.5 hours every day as much as the next person, but that’s a minor setback. There’s also all of those advising meetings or events that only seem to occur before 5 p.m. You want to better your future by attending the Career Fair? Excellent idea! It’s between 10:30 a.m. and 3:00 p.m. “so that you will have plenty of time between classes to meet employers.”

So, if you’re a daytime employee, and you’re looking to change careers, you’re S.O.L. unless you’re cool with taking at least two hours off work to stand around and press the flesh.

Have a required meeting with your college adviser? No problem! Except, they go home before 5 p.m., and usually only want to ask you questions that are wholly unrelated to your stage in life, making that hour you took off work a complete waste of time. Awesome.

Meetings and events are just the icing on the cake, though. The real camel’s straw here is the inevitable fatigue and irritability.

Twice now, just after finals, one or two of my bosses will pull me into that closed-off room, far removed from prying-ears (or witnesses), and ask me politely, “What the hell is going on?”

Hey, I’m a pretty good worker bee, but even I succumb to exhaustion and sub-par honeycomb performance after 16 weeks. I’ve also been known to engage in cave wailing from time to time like a lovable banshee.

It’s no coincidence that one of my previous professors endearingly remarked after a semester had finished, “You’re a cranky broad, aren’t you?” Cute.

At one point in my life, I’m sure I was the bee’s knees, just a perky little thing. I’m also sure that was before I made this harebrained decision to get a degree. Make no mistake, though; I’ve no regrets about this decision – others might – but I don’t.

In earnest, I’ve lucked out fairly well with my job and relationship, all things considered. My bosses are more than understanding, and my partner knows to go hide in the mountains with the Honeycomb Hideout Club and a case of beer for the last two weeks of the term.

The only area where I can’t seem to catch a break is on campus.

True, it’s not as easy as it could have been, had I jumped into this out of high school, still riding the coattails of my parents’ tax returns, and working that flexible part-time job (or no job at all).

But, like so many before me, and more to come, it can be done. At least, I hope so. I’ve two semesters left, two required courses that aren’t being offered in either, and neither of which have anything to do with Longfellow.