The Society of Akron Graduate English Scholars (SAGES) wanted to break down boundaries and make students think about how they exist within their discipline, but also how they influence the larger academic world.

To do this, the group held the first Interdisciplinary Student Conference, titled “Bondage and Liberation.” 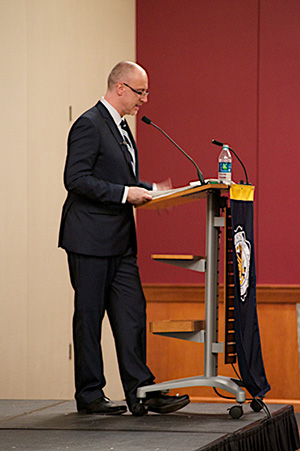 “For us, this wasn’t just about creating an interdisciplinary conference,” James Bigley, the secretary of SAGES, said. “It was about liberating how we think about our role as academics, researchers, students, activists and brilliant innovative thinkers.”

The conference included a series of panels on Wednesday, followed by the keynote speaker, Dr. Tim Dean from The University of Buffalo. Dean delivered his lecture, titled “Stumped: The Pornography of Disability,” which focused on how those with disabilities achieve sexual satisfaction.

“When disabled people publicize their sexual activity in the form of pornography, they activate an unstable circuit of gazes, attitudes and emotions,” Dean said. “Making themselves visual as sexual subjects, rather than merely as exotic objects, the disabled are announcing that they have not only rights, but desires, desires that many people still view as unacceptably perverse.”

The panels in the morning focused on a variety of topics surrounding the concept of bondage, including “The Business of Bondage,” which Bigley said focused on food acquisition; problems with debt, both on a national and personal level; and the ways in which literacy inhibits and promotes our progress as individuals. Other panels included “Literal Identities and Linguistic Motivation” and “Under Self Construction: The Power of ‘I’.”

“It’s our job as academics to create theoretical conversations with one another,” Bigley said. “I found that not only were the audience members responding to one another, but the individuals on each panel were talking to one another and really making an attempt to challenge one another.”

Bigley also said that sex can be a controversial subject for people, but it needs to be talked about.

“We have to learn how to talk about it, how to get comfortable with it, and how to approach it from an analytical standpoint,” he said. “As academics, we need to challenge ourselves to rise above our own predetermined standards and philosophies and challenge ourselves to make sense of the things we don’t agree with or don’t necessarily
understand.”