Owning an animal is often a joy that cannot be explained, but rather is felt in the owner’s heart. Often, the bond between pet and owner is stronger than bonds between people. However, what happens to animals that are neglected and sometimes abused?

The Cleveland Kennel/Animal Control Center takes in 75 dogs per week, providing them with food, shelter and necessary shots, according to their website. They then find rescues for the dogs, such as Mercy’s Door Pet Rescue located in Greenwich. Finally, the volunteers at the rescue assist in finding loving permanent homes and foster homes for the dogs. 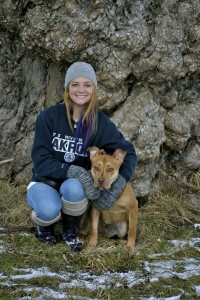 Kallie Karman is a junior at UA studying philosophy, political science and economics, and has a soft spot for rescue dogs. Karman has always had a pet from the time she can remember. She currently has four dogs and two horses. Karman’s animals did not come from rescue kennels until she saw Nala through a posting
on Facebook.

“It is so insanely heart breaking. It’s almost hard to feel good about saving one when you see so many others desperately needing a home,” said Karman passionately.

Nala is a rescue dog originally from The Cleveland Kennel/Animal Control Center. She is a special pit bull with a past that is all too common for many animals. Nala was found wandering around the streets of Cleveland by a dog warden who saw she had a gunshot wound to her hind leg.

Nala was saved by The Cleveland Kennel/Animal Control Center, but she was not in the clear yet. The facility can only hold the dogs for three to 10 days before they have to be euthanized because of lack of space and resources. The rescue volunteers primarily use social media such as Pinterest, Twitter, and Facebook to promote adoptions and foster care of the animals.

Through volunteers sharing pictures of other urgent adoption and foster animals, Karman happened to see a picture of an animal that only had a few days until being euthanized. She brought two of her three dogs with her, as requested, for a meet and greet with the potential dogs. The first dog that Karman and her other two dogs met was not a good fit. Next, the rescue volunteers from Mercy’s Door Pet Rescue brought out Nala.

“Nala was such a great fit. My dogs love her so much,” Karman said.

Nala is now Karman’s first foster pet and will not be her last. She hopes to adopt Nala permanently in the near future.

“I will never buy a dog again after experiencing what I did at the Cleveland Animal Control Kennel, and how hard the volunteers and rescues work to save so many awesome dogs every single day,” said Karman.

Some of the animals available for adoption are listed on their website at mercysdoorpetrescue.org.