Every year, the NFL Combine gives teams the chance to evaluate prospective players on physical and mental levels before potentially investing millions of dollars on them.

An athlete’s work ethic, durability, maturity and overall football skill all come under analysis. In addition, it is now publicized that sexual orientation comes into question before a player makes it onto a team’s draft board. 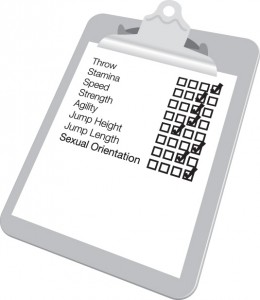 Colorado tight end Nick Kasa claims that one team asked him about his marital status and if he liked girls. Also making similar claims are Michigan quarterback Denard Robinson and Michigan State running back Le’veon Bell, according to espn.com article.

Reports have also come in about teams inquiring whether or not Notre Dame linebacker Manti Te’o is gay, which he has denied publicly. If he is, then who cares? His performance on the field should outweigh his sexual orientation.

This blatant prejudice is despicable and cannot be tolerated by the NFL. Homosexuality is not something that should be hidden from the world and no one should be persecuted for his or her sexual preference, even in a high profile hiring process such as the NFL draft.

If teams are worried about a potential disruption in the locker room, I believe their focus should be concentrated on the players who are anti-gay. Those are the real instigators.

Steps must be taken to progress our culture into a more tolerant one of equal rights.

Unfortunately, enough ignorance exists to keep quiet almost anyone willing to come out. But being in the spotlight of professional sports may just be the necessary platform to sway the overt discrimination against same-sex relationships.

I can’t imagine the fear and hesitation a gay professional football player (or any person, for that matter) may have about going public with his sexual preference. In order to see a decline in this prejudice, it may take a high profile athlete to come out of the closet and show the world that being gay does not make someone less of a human being.

President of the NFL Players Association Dominique Foxworth has offered his support to whomever that “pioneer” will be. He also stated in his Huffington Post blog entry that this individual would earn a place in civil rights history.

Also, in a radio interview on Bull and the Fox in Cleveland, Browns linebacker Scott Fujita said he believes NFL locker rooms will be accepting of gay teammates.

The most important thing these players are doing is getting people talking. The more society addresses this issue, the closer we get to making a change.

Further leaps are necessary to push our culture into a new era of tolerance, and the NFL must set a positive example. It certainly won’t be easy, but the narrow-mindedness, hate and discrimination need to come to an end.