Perhaps it was back-to-back road games that wore down the Akron Zips. It could have been the poor shooting performance that was too much to overcome. Or maybe Buffalo forward Javon McCrea was just that good. 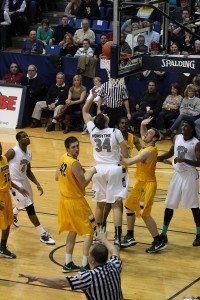 One thing for certain is that the nation’s longest win streak was snapped on Saturday night.

The Bulls could seemingly not be stopped down the stretch on the offensive end, as a 4-of-21 night from three-point range killed any chances of a late rally from the Zips. Buffalo finished with four players having at least 13 points, shot 56 percent from the field, and got a dominating performance from McCrea.

The 6-foot-7 junior finished with 26 points on 13-of-18 shooting, six rebounds and four blocks.

Akron was able to take the lead briefly in the second half, leading 44-43 inside the 15-minute mark, but the Bulls proved to be the team with more energy in the closing minutes.

While Buffalo’s lead grew to as many as 12 points with 3:34 remaining, the Zips hung around, making it a 71-63 game with 2:39 to go. The Bulls responded with six straight points, virtually sealing the victory.

“We were worn down from the get go,” said Dambrot.

While the usual high-energy Akron frontcourt of Demetrius “Tree” Treadwell and Zeke Marshall were productive in the scoring column, combining for 31 points, they could not find an answer for Buffalo’s continuous inside scoring.

The Bulls found their stroke from outside as well, hitting 7-of-17 from behind the arc.

“We just got to rally ourselves…we’ve got to go back and play Tuesday, which is a quick turnaround,” said Dambrot.

Akron will host Miami (Ohio) on Tuesday night in the first of two games in their final regular season home stand.

The first matchup between the two teams required a second half comeback by the Zips after they trailed 25-16 at halftime. A 38-25 advantage in the second half gave the Zips a 54-50 win and a 10-0 record in the MAC.

Tuesday’s game is set to tipoff at 7 p.m. and will be broadcast on Sports Time Ohio.