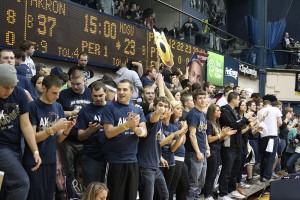 Several teams in the conference have already secured their places in the tournament: the No. 1 seed goes to Akron, the No. 2 seed to Ohio, Central Michigan gets the No. 10 seed, No.11 for Northern Illinois and No. 12 to Miami.
The other seeds have yet to be determined, and will be decided after the final conference games this weekend.

Four Akron players scored in the double digits against Miami. Zeke Marshall spearheaded the team with 14 points on the night, followed closely by Nick Harney with 13, Alex Abreu with 12 and Demetrius Treadwell with 10.

The Zips’ final home game will be this Saturday when they take on Kent State at James A. Rhodes Arena.