The atmosphere of the class reunion was great. Everyone was excited to see each other after so many years had passed, and gossiped lightheartedly about who had become fat, bald or unemployed…until the murder occurred.

The University of Akron’s Zips Programming Network (ZPN) was host to a Murder Mystery dinner last Thursday from 6 p.m. to 8 p.m. in the Student Union. With an audience of about 30 people, it was considered by senior Jonathon Morris, head of the event, as “a fun and exciting way for students to work together to solve an interactive and thrilling murder mystery.” 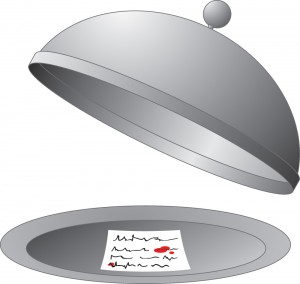 With a ’50s diner theme, there were creative music note centerpieces, old-school music playing in the background and free food. Burgers and French fries, served with milk shakes of several flavors, were provided to all who attended the event.

Various actors and actresses laid out an entertaining and comedic story, containing elaborate characters that ranged from a kleptomaniac psychic to a John Travolta look-alike. Each actor displayed their unique personality, giving the audience clues about who they were. Their convoluted relationships with one another gave the attendees the feeling that they were in the middle of a soap opera.

The evening started with the kidnapping and murder of Sunny, who was innocently attending the class reunion. At this point, everyone was curious as to what was going on and who would do this to Sunny. The audience was separated into teams, according to table, and it was up to them to figure out who the murderer was.

Each member of the audience was given a detective sheet for notes so they would better remember all the clues that were given on each of the suspects. The audience could refer to their notes in order to make the final decision on whether the murderer was Sylvia, Ben, Vic, Mr. M or Joni. Each suspect had the possibility of being the murderer.

By the end, the actors had the audience laughing, dancing and extremely curious about the murderer. Before the killer was revealed, everyone was given the chance to ask the suspects about their whereabouts, motives and thoughts on the murder in order to guess more accurately.

“The whole thing was suspenseful,” said sophomore Katie Allen. “I was tense hoping that my guess was right.”

To give the audience a better incentive to guess the right killer, the team who guessed correctly and provided the best evidence received a prize. Once the murderer was revealed, the prizes were awarded. Each member of the winning team received a “Murder Mystery” coffee mug and bragging rights.

The killer turned out to be the character Ben. This conclusion, however, was not easy to come across – and here comes the soap opera.

The audience members first had to notice that Vic and Sunny were identical twins and Ben couldn’t tell them apart. This means that the killer could have meant to kill Vic instead of Sunny.

The second clue was that Vic was married to Joni, who Ben happened to be in love with. Ben wanted Vic out of the way to be with his love, but must have mistaken Sunny for Vic.

From these clues the mystery seems easy to solve, but along the way there were many false clues and signs making the other characters seem just as guilty as Ben.

After the event, one of the actresses revealed the key to their performance.

“Our success completely depends on the audience and their engagement. This time was absolutely great. A lot of good questions were asked and there was a ton of involvement from everyone,” said Natalie Green (Sylvia).

ZPN is currently working on making the Murder Mystery a tradition at The University of Akron, so stay tuned for a chance to attend. To find out more about ZPN events, their calendar is located on the University of Akron webpage: uakron.edu/studentlife/zpn/calendar-of-events.