The voice of Goofy stops by UA

Farmer opened up his speech stating that he doesn’t typically do speeches or performances in the college circuit, but made an exception for The University of Akron. He then proceeded to do a Goofy impersonation, proving that he was, indeed, the real voice of Goofy. 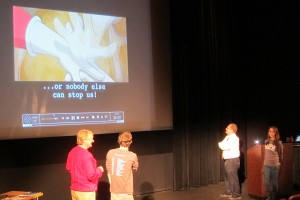 Farmer was named a Disney Legend in 2009. His handprint can be found hanging up in Disney Studios alongside fellow legends such as Betty White. He has also been awarded the International Family Film Festival award, being the first voice-over actor to receive the award.

He has also voiced Bugs Bunny and Daffy Duck in an episode of Robot Chicken, directed by Seth Green. Currently, he is working as a voice actor for the new Monsters, Inc. movie.

Farmer showed the audience a variety of clips portraying his voice acting work over the past 24 years in different movies and broadcasted programs.

Farmer grew up in Kansas, and always dreamed of voicing the cartoons he watched every Saturday morning. He said that he grew up in an area where everyone got stuck in Kansas, doing the same jobs their families did, and so he never thought he would make it to Hollywood.

Farmer received a degree in broadcast journalism from Kansas University. He began working on different voices in college, and would perform them from time to time. After receiving his degree, he went on to work in radio, where he used different voices for his programs.

Farmer, fed up with radio, wound up in Dallas. Still not having found his calling, Farmer began to seek out a dream in hopes of finding his passion. Farmer began doing comedy routines at open mic nights, and was well received by his audiences. 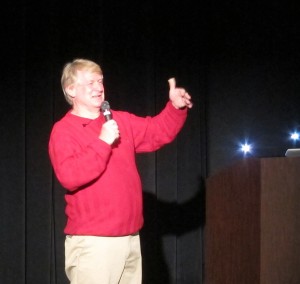 He began doing comedy routines on the road, and gained publicity. Eventually, Farmer received a call being asked if he wanted to voice Donald Duck, Mickey Mouse and Goofy. In January of 1987, he got a call stating that he received the voice of Goofy.

Farmer’s first attempt doing a Goofy voice-over was in “Disney’s Dog-on Valentine.” While he was very anxious about matching up the cartoon’s lip movements with his words, he practiced and was able to get the hang of voice-overs.

After briefly describing his work experience, Farmer invited Tom Faessel, the associate director of residence life activities, to the stage to participate in an activity. Farmer referred to Faessel as, “the greatest Disney fan I’ve ever met in my life.”

He then invited a male and female UA student to join Faessel on stage. He told his chosen volunteers that they would be watching a clip of Goofy, and then would have to do a voice-over of the scene using Goofy’s voice.
After the activity, Farmer played a video of well-known actors and actresses who have done voice-over acting in Disney and Pixar movies. One surprising fact that Farmer shared was despite being very involved with Disney, he was never, nor is currently, an employee of Disney.

Farmer proceeded to shift his speech to the topic of leadership, and shared his “Goofy’s Guide to Leadership.”

1. Don’t procrastinate: Take advantage of the experiences around you and don’t be afraid to try to achieve your goals and dreams.

“All I had to do was get up on a stage and perform a five-minute comedy routine, and it changed my life,” Farmer said.

2. Life is not, nor ever will be, fair: There will always be someone better than you, or who has more privileges than you.

“There are things beyond your control, and things that are within your control. Life is luck versus perseverance, which will equal opportunity. Opportunity, plus work, equals success,” Farmer said. “It’s not the cards that you are dealt, but what you do with those cards.”

3. Take life slow, and apply balance to everything you do: You can’t get overwhelmed by life or the hecticness of your schedule; you have to make sure you balance everything, and are balanced in the way you do things.

4. Feed your spirit: Find out what your passions are and follow them.

5. Work towards your goals and you can find happiness: Hard work oftentimes leads to success.

After sharing his guide to leadership, Farmer then opened up the floor to questions. UA students took advantage of being able to ask the Disney legend questions about leadership and anything pertaining to Disney.

“I think it was a really unique program based on the perspective Bill was able to offer on leadership and his background in Hollywood,” said junior Sean Blasko. “I got to spend some time with Bill before and after the program and it was amazing how down-to-earth he is. It was great to get a chance to see how someone can be successful and achieve their dreams through focus, perseverance and drive over many years.”