Alexander Somoskey, a second year graphic design student at UA, won three awards at this year’s ADDY (Alcohol, Drugs, Driving and You) Awards for his work on a campaign to stop texting while driving.

“I was ecstatic,” Somoskey said. “I never thought I would be able to accomplish something like that so early in my career. In everything I do, I strive to be the best I can be, so to be recognized like that really means a lot.” 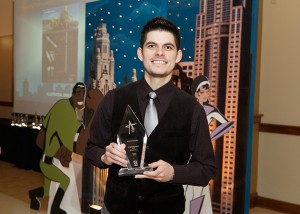 An ADDY is an award that comes from the Canton Advertising Federation, which is a part of the American Advertisement Federation. This award has different sections for companies as well as students to compete in various categories of mass media and elements of advertisement.

Somoskey, who entered this competition for the first time this year, won two gold awards in the “Poster Campaign” and “Visual Logo Design” categories. His silver award, which was in the “Publication Design Cover” category, won due to a design that he did for the Cleveland Cavaliers.

For the Poster Campaign category, in which he won gold, Somoskey entered his piece titled “Don’t Text and Drive,” which he completed in a UA class during the 2012 fall semester. This campaign took two weeks to finish and he worked on it throughout the day: both in class and out.

Somoskey said he decided on the topic of texting and driving because he felt like it was a serious topic that college kids should be aware of and he wanted this campaign to show the true dangers of the practice.

Somoskey started his internship with Grabowski & Co. in May of 2012. He was hired to help the company in their graphic design department. This was something that he never thought would happen considering that he is a sophomore. While working at Grabowski & Co., he said he has been a part of projects for many different clients, and has gained knowledge and contacts within the graphic design industry.

When it came to the ADDY competition, a co-worker of Somoskey, named Jennifer Draher, told him about entering in the competition. Draher is on the board of the ADDY awards and she encouraged Somoskey in entering some of his work during the student portion of the competition.

“It was an amazing experience, and to be able to win awards for each of the three pieces I submitted was a blessing,” Somoskey said.