I’m not sure how mystically in tune everyone else is, but I stumbled upon a person claiming that after the pope resigned, a meteorite would strike the earth. 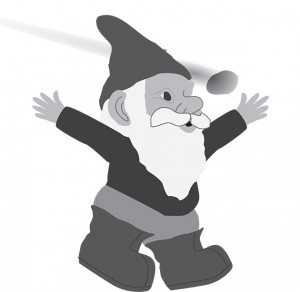 This meteor was endowed with five-day energies and now all the world is infused with happiness and we are closer to transcendence…then I ripped off my ear buds and turned on some reality – TV that is.

The television was speaking about fracking and the various issues people are concerned about. Many were holding signs and chanting like a cult; there was even a drum for some reason.

Anyway, fracking is one solution to America’s energy issue and it uses pressurized water and chemicals to fracture the earth and release precious, clean burning, natural gas. While this act of cracking open Mother Earth was atrocious and my heart wept for the sprites and elves of the woods, I accepted whatever solution would put us one step closer to ending our worldly issues.

I see any solution as coming with a price. People have claimed that fracking unleashes deadly chemicals, even gas, into the water table. Videos out there have demonstrated their water’s flammability, as did the movie “Promised Land.”

The movie follows the battle between an evil corporation and small town Americans – Big Business vs. America – so it misses the issue. And when the videos and movies are debunked, people throw up their arms and cry out conspiracy.

It’s crazy-man logic to assume that all scientific inquiring is a part of a conspiracy from big energy.

The reason those men in lab coats are telling you fairies don’t exist is because they’re probably smarter than you. I’m coming from a stance of, well isn’t this what you wanted?

Didn’t you want cheaper things and lower gas prices? Well, to get oil cheaper, we need to install this dictator here or buy from factories in Mexico and China where they slash prices on humane working conditions.

I know the world isn’t that black and white, but for the common American, who the hell cares? That’s simple enough. I know, confidently, these same people who complain about the risks and methods of energy extraction turn right around and complain about the state of energy and greenhouse gasses and killing Mother Earth.

Instead of fracking, why not just hold hands and absorb the natural energy given off by Mother Earth and live in peace and love?

I could care less about Mother Earth; she is a spaceship that kills 99 percent of all life and can survive meteor strikes. Trust me, she’s a tough bitch.

And while the rest of America is turning into a bunch of transcendental hippies, I’m working tirelessly to beat India to Mars in my personal spacecraft. Thank you, international aid.