Chance of the ages

Though there are no longer regular-season games to use to rank the teams, there is the actual performance of each team in the tournament. 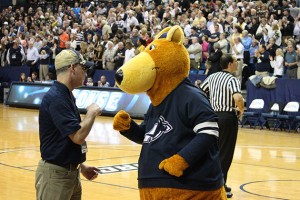 The Lady Zips have been an exciting surprise this year, receiving the third seed in the tournament. Most basketball fans often ignore women’s basketball for the oft-covered men’s basketball. Zips fans, however, would be wise not to ignore our Lady Zips, because they have just as much potential to make a run for the big dance as the men do.

The Lady Zips made history this season as they achieved 20, which is a first for Akron women’s basketball. Jodi Kest has been a phenomenal coach whom may take us to an NCAA tournament bid in the near future. In fact, that possibility is entirely achievable yet this season.

The stumbling block for the Lady Zips will be the possibility to play both No. 1 Toledo and No. 2 Central Michigan in back-to-back games. When the Zips faced both teams in the regular season, they lost. Toledo defeated Akron 77-65, while Central Michigan unfortunately annihilated Akron 92-69.

The Zips certainly have the talent and the depth to overcome both of these teams in the tournament; however, it will require tremendous focus and effort, as well as support of the fans.

There have certainly been many uplifting times this season, as well as some terrifyingly sad ones. About a week ago, the Zips lost one of its keystone players, and lost two of its final three games. The Zips also lost games to underrated Costal Carolina and Detroit earlier this season, as well as a loss to under .500 Buffalo that snapped the longest winning-streak in the nation.

This season, the Zips achieved their first season ranking in the history of the program, No. 24 in the Week 17 coaches poll, and the Zips continued a tradition of 20-win seasons under the leadership of coach Keith Dambrot.

This past week Dambrot was named the Mid-American Conference coach of the year, and this isn’t without merit. The Zips have become one of the hottest mid-major teams in the nation to watch, and no Zips fan should forget that.

After the loss of Alex Abreu, there has been considerable talk that the Zips don’t stand a chance in the tournament, by both analysts and fans themselves. There were also a few times that I found myself saying these things. The problem with this thought, however, is that it doesn’t critically analyze the season that the Zips have had.

To put everything into context, the second best team in the Mid-American conference, the Ohio Bobcats, have lost more games overall on the season, and narrowly defeated Kent State and Buffalo twice – the only conference teams Akron lost to this season.

The Mid-American Conference is an extremely competitive conference, and there isn’t a single analyst, prognosticator, player or fan who should count the Zips out of the championship. The most important factor in Akron’s success is confidence. The Zips had many challenges this season that put doubt on the vision that they can make it to the NCAA. But the fact is they can. This year could be Akron’s year to shine, and everyone needs to stay focused on that possibility. We are not down and out, and we haven’t lost yet.