With copious amounts of student organizations offered on campus, female students have the opportunity to experience and take on many diverse leadership roles.

One student leader, Elizabeth Davis, the USG director of internal communications, has had a very positive experience in her leadership role. 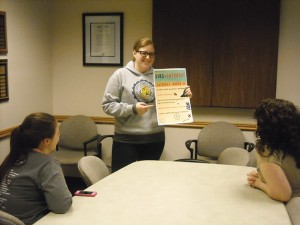 “I have enjoyed meeting new people and gaining a variety of knowledge about different areas of USG and my position,” Davis said. “As I am just starting out, I am very excited to see where this position may lead me in the future, and I can’t wait to really start making a difference.”

Despite the countless opportunities and success that can come from being a leader, female leaders may face obstacles they have to overcome in order to be an effective and productive leader.

“One difficulty that I constantly face in leadership roles is trying to find the balance between being authoritative and coming across as rude or overly harsh,” said Dana Dohn, the president of Alpha Phi Omega Service Fraternity. “In public speaking and positions of power, men are expected to be authoritative and direct when asking a question, making announcements or giving instructions. Women, on the other hand, are not.”

Dohn says that it can be very difficult to find a balance when talking to her organization, as she strives to be respected when doing business tasks, but still come off as relatable. Emily Sherwood, the president of Residence Hall Programming Board (RHPB), also feels that I can be difficult to balance being authoritative while remaining feminine.

While not personally experiencing male opposition against her authority, Davis has recognized that this still can be an issue in today’s society and on campus.

“I feel that some men still have the mentality that women are not as effective leaders as men,” Davis said. “This can cause them to question the authority of women. However, I also feel that this mentality is starting to shift.”

While some groups or organizations may have to face the struggles of having male opposition to female authority figures, Dohn, Davis and Sherwood all felt that male opposition was not, and is not, an issue in being able to effectively do their jobs.

“I’ve never really considered myself a female leader as much as just a leader in general,” said Sherwood.

“Although there are more males than females in USG, I have not run into any problems carrying out my duties as a female in USG,” said Davis.

Overall, having the chance to become a student leader on campus, regardless of one’s gender, can be a wonderful and life-changing opportunity.

“Despite the fact that it is a lot of work, it is one of the most worthwhile and meaningful experiences that I have ever had,” Dohn said. “I am able to personally connect with key players in the community and make a substantial difference in the quality of life of the residents in the community. Few people are more grateful than those whom we are providing service to, and being able to have that substantive impact within the community is priceless.”