What better way to celebrate Women’s History Month than to gather inside a historic house and sip delicious tea?

The Hower House held a performance in the center hall dealing with the onset of World War II and how women were involved in the war effort. 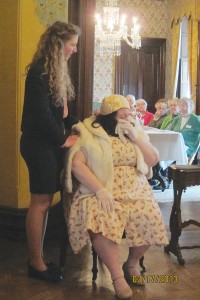 Directed by Frank Chaff, “In the Company of Extraordinary Women” is set in our very own Akron in the early 1940s.

The play tells the story of Grace Hower Crawford and her three friends and how they struggled with the news of World War II. As they coped with their loved ones gone away at war, they did everything they could to devote their time and effort to helping them.

Above all, the women loved writing letters to their friends and families in the war, just as much as they loved receiving answers to them. They felt that writing letters was a way to help eliminate the grief of being away for so long from the ones they loved.

“This performance is important because it allows us to understand what the women of our city did and felt during one of the most difficult times in our history,” said Chaff.

What really brought the audience into the era was the costumes the actresses wore. The women wore square-shouldered dresses that ended just below the knee, along with wedged heels. To top off the look, they wore red lipstick and their hair was done in long locks.

Actress Alex Agosta said acting in the play was a lot of work, but in the end it was worth the effort and that she had a fun time performing.

“It was sad that most of the men were off at war, but it gave women a step up in society,” said Agosta.

Agosta plays one of Grace’s nieces, Alex, who lives with her and keeps her optimistic during the war. Her older sister Annabelle’s boyfriend quits school to join the army, and the women throw a going-away party after the New Year.

The play was not only a series of dialogues, but it incorporated singing. The songs changed with the mood of the play, first with a feeling of grief, and then ending on a high note when the war ended. The actresses even encouraged the audience to join in on one of the songs, and soon everybody in the Hower House was singing along to “Pack Up Your Troubles in Your Old Kit Bag.”

Attendee Barbara Laughlin said she was born in the 1940s and was too young to understand what was happening at that time. 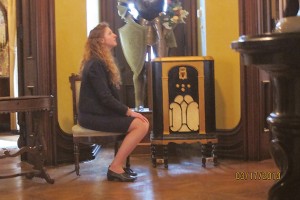 “The play was very nice and timely. It showed how women took charge more than previously. It encourages women to stay involved,” Laughlin said.

Actress Miranda Roth, who played Grace Hower, said her favorite part about being in the play was that there was always something new to learn. Roth is an alumnus of the University of Akron and has played the role of Grace Hower Crawford for five years in a row.

“I hope the audience will get an understanding of what people went through during World War II,” Roth said.

Having the performance in the house of the Hower family truly gave a historic feel for the audience. It allowed the audience to feel as if they were really in the midst of the ‘40s.

“The best part in working with this show was being involved with such talented people and being able to work in such a beautiful house filled with so much history and so many memories,” Chaff said.

After the performance, guests were welcome to tour the entire Hower House. The Hower House has three floors with a ballroom on the third floor. Unique architecture and rare treasures can be found throughout the whole building.

“I found my father’s picture among one of the collections upstairs. It brought tears to my eyes,” Chaff said.

Visiting the Hower House and watching “In the Company of Extraordinary Women” was definitely a memorable experience. The elegance of the house combined with an informative and entertaining performance was something truly unforgettable.

“In the Company of Extraordinary Women” performance series is sponsored by the Friends of Hower House. Every year provides a new topic and cast of characters.

“I hope the audience could feel the emotions of these real people who lived in our city,” said Chaff. “History isn’t a collection of dates and events: It’s about people, and what things come into their lives. It’s about what makes them laugh, what makes them cry. It’s about how they deal with their lives. I tried to show them as human beings who loved and laughed and held each other during their times of need.”