The Akron women’s basketball team set records as well as new standards in 2013.

When women’s basketball head coach Jodi Kest arrived in Akron for the 2006-2007 season, the program was not in a
good place. 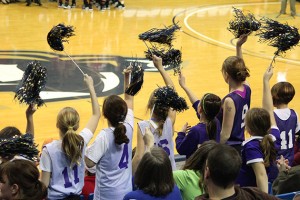 Now, the Lady Zips are one of the up-and-coming premier programs in the Mid-American Conference, a conference that is known for women’s basketball teams.

On Saturday, the team lost their first-ever MAC championship game to a heavily favored Central Michigan squad, 86-68, despite being down by only four at halftime.

Though the loss had a few of the team members in tears walking off the court, none of the players had anything to feel ashamed about.

“Number one, I am very proud of our kids,” said Kest in the post-game conference. “I’m proud to be their coach today.”

The Zips had to win two games in the MAC tournament to make it into the championship game. They beat Buffalo on Thursday 83-79, and then defeated No. 2 Ball State 70-61 on Friday.

“I told them in the locker room that one game, one win, one loss, does not define our season,” Kest said.

Any one game may not define their season, but aspects of that game can explain why they were successful in 2013; the quarterfinal against Buffalo proved that. The Zips had four players in double figures. They played hardnosed basketball for 40 minutes, and were able to stick out a win. This was the formula that gave Akron the most successful season in their history, and made them tough to beat throughout the season.

Kest, however, is ultimately correct that one game does not represent a season, especially when it comes to a championship game. In the second half, the Zips decided to play zone defense. Though they have played zone before, the program plays man-to-man defense most of the time.

The Chippewas knocked down eight 3-pointers. Central shooting guard Niki DiGuilio had four all by herself, most from the corner. They hit six in the second half that took the wind completely out of the sails for the Zips, and clinched the championship.

The Zips opened the year 8-1 and finished with a MAC record of 11-3. They are currently 23-9. Kest commented after the championship game that she felt her program had a good chance at getting a Women’s National Invitation Tournament (WNIT) bid.

“I think getting to the championship probably got us into the WNIT, and we will represent the MAC and try to win as many games as possible,” Kest said.

Akron broke many records, star foward Rachel Tecca was named player of the year, they may clinch a postseason birth, and the future is bright for the Zips. They return four starters and a sixth man next season. They also have a strong recruiting class coming in. It is still a work in progress, but the program is getting closer to accomplishing its goals.