Think of the first thing that comes to your mind when you think of athletic trainers. You may have an image in your head of some sport you idolize, or some dumb jocks who are just interested in working out all day while trying to sell you some sort of overpriced muscle building supplement. What many might not realize is that isn’t a good description of those in the athletic training field at all. 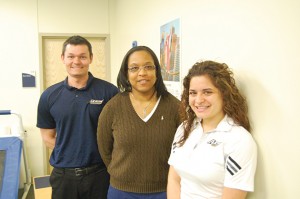 “If I had to be honest, and I hope I don’t offend anyone, but the first image that comes into (my) mind is football players.” said freshman Brianna Kern when asked about athletic trainers. “I guess I really don’t have a good frame of reference, other than what you see in television shows or some movies.”

For most college students like Kern, the month of March is representative of spring break and college basketball. Few students know that it’s Women’s History Month, and yet even fewer students probably realize that March is also Athletic Training Month, which is designed to educate people on what athletic training is and how it affects our everyday life.

Each year the National Athletic Trainer Association (NATA) sponsors a national campaign to educate the public on what exactly athletic trainers are and the many services that they offer to the public.

Tsouris, along with several fellow seniors in the University of Akron’s athletic training program, explained that athletic training goes far beyond simply being involved in sports, but rather that it requires quite a bit of hard work.

“For our program we are required to get 1,500 hours of clinical education in different settings,” Tsouris said. “(Clinicals) includes a rotation at the physical education clinic on campus treating something as simple as the common cold, to getting experience with surgeons.”

One of the purposes of the clinicals is to give students the opportunity to work with different personalities and with different situations. College students are mostly young people in good health, and so the program incorporates a rotation between sports teams, orthopedic surgeons and clinics such as the one on campus.

When asked about some people’s impressions of athletic trainers just being dumb jocks, senior Adam Oldag explained how that is an incorrect assumption. 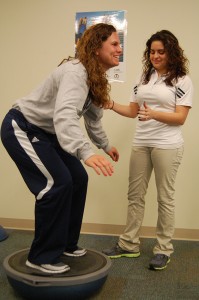 “(Athletic training) is definitely part of the medical field,” he said. “The common thing that we all hold is that we want to help people to live healthy and full lives.”

In addition to the bachelor’s degree that they must obtain, athletic trainers must pass the Board of Certification exam, pass an individualized state certification test, and complete 50 hours of continuing education for national certification.

According to the National Athletic Trainers’ Association website, 70 percent of practicing athletic trainers have a master’s degree. Compare that figure to people with a master’s degree across the general workforce, which is at 7.98 percent.

University of Akron softball player Kellie Roudabush is one of the people whom athletic trainers strive to help.

“If you are injured, they have the experience to make sure that you heal quickly,” Roudabush said. “Last year I had a really bad high ankle sprain which I was given six weeks out to recover from. By working with my athletic trainer, six weeks ended up (being) two and I was able to play again.”

With such a high education level and clinical experience that most athletic trainers must go through in order to become an athletic trainer, it is a mystery why some misconceptions may exist. This is the reason the NATA sponsors the National Athletic Training Month every year.