As the first round of the NCAA national championship tournament begins, there is a lot of bracket and team analysis going around the media. If you’ve had the misfortune to read any analysis on Akron and VCU, you’ll surely hear that the Zips are going to be blown out. Now, I’m not going to pretend that Akron is a sure win in this matchup, because we aren’t. However, I do promise to give a more reasonable and fair analysis of the two teams and how it is likely for both teams to win. 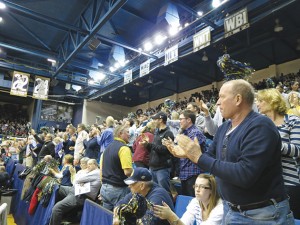 The first thing that Zips fans ought to know about our newest 2013 foe is that they are a foe we are actually quite familiar with. Virginia Commonwealth University’s head coach is one of our own. Coach Shaka Smart was an assistant coach with Akron head coach Keith Dambrot from 2003-06, and Smart was frequently referred to as Dambrot’s right-hand man, according to a press release from ESPN.com.

What most analysts forget to mention is that the Rams and the Zips played each other last season, and Akron narrowly lost by one at the buzzer in overtime. Both teams haven’t changed much from last year, so there is no reason to believe that this game should be a complete blowout.

The interesting dynamic in this game is that both coaches know each other well, as if they were conference foes. This is a benefit for Akron because the Rams run a very intense full-court defensive style, which their fans affectionately call havoc.
Their defensive strategy is to put constant pressure on the ball carrier to force turnovers and to prevent three-point shots. VCU has no player listed as a center, which leaves their defensive strengths strictly to the full-court pressure. This defensive strategy is a perfect way to exploit Akron, who averages 14 turnovers per game, and is relying on freshman Carmelo Betancourt to handle the responsibility of getting the ball down the court.

It is this combination of Akron’s point guard situation and turnover rate that makes most analysts believe that VCU is a sure win.

For Akron to Win

Clearly Akron is the underdog in this contest, but they aren’t without some major advantages that, if exploited, can give them certain victory. The purpose of VCU’s defense is to prevent the ball from moving down the court at all costs. If Akron can get the ball down the court and to the basket, Akron has the potential to dominate with Zeke Marshall and Demetrius Treadwell’s height advantage.

VCU averages 19.9 turnovers per game as well as 19.9 fouls a game (No. 313 of 347 teams in the nation). Akron is 66th in the nation when it comes to drawing opponent fouls. Rebounds are also an advantage for Akron, where Marshall individually averages more rebounds per game than all the players on the Rams squad combined.

Ultimately this game is going to come down to two things for Akron: rebounding and free throw scoring. Akron will need to draw fouls for additional scoring opportunities as well as to cut down on the chances that VCU has to score. By holding onto the ball, Akron will gain a needed advantage.