Don’t give up on Akron

The 2012-2013 Akron Zips basketball season was marked with adversity, which the team was forced to overcome throughout the season. The Zips, however, fell to a final dose of adversity in the first week of the NCAA tournament, losing to Virginia Commonwealth University 88-42.

Before the season began, the Zips lost senior forward Quincy Diggs due to a violation of The University of Akron’s student code of conduct, last summer. Diggs was accused of violence against another student. However, no charges or additional information have been released. 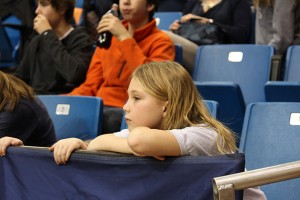 The Zips also lost Nick Harney and Demetrius Treadwell for the first three games of the season due to issues with NCAA clerical errors from the University’s compliance department. During the most vital time of the season, Akron lost their point guard Alex Abreu due to an arrest for allegations of marijuana trafficking.

Through all of this adversity, the Zips were able to overcome and win the regular season and tournament titles outright. This gave them an automatic bid into the NCAA tournament, where they suffered a final dose of adversity from which they were unable to recover.

During the broadcast of the Michigan game, CBS broke a story that the Zips would be playing without senior Brian Walsh and freshmen Pat Forsythe and Deji Ibatayo. Walsh, the lone starter of the three players, had been hospitalized with the flu less than 14 hours before the matchup against Virginia Commonwealth University. Forsythe, who was Walsh’s roommate, came down with the same illness. Ibatayo was lost in practice the day before after having back spasms.

Though Walsh and Forsythe were able to play for limited minutes during the game, they were in no condition to contribute anything of value to the Zips.

To make matters worse, VCU’s head coach Shaka Smart was a former Zips assistant coach who knew the Zips well. Though Akron was not the favorite in this matchup, had they been at full strength, the game would not have been as much of a blowout as it was.

Looking on the bright side

ESPN and most college basketball fans will continue to look at Akron as the perpetual NCAA chokers, as they have gone 0-4 in tournament appearances. Though there is a lot to be down about after such a devastating loss, there is a major upside to the Zips that we shouldn’t overlook.

Despite all of the problems they faced this season, they were still able to go 26-7 overall and win the tournament championship – and those successes did not rest on the shoulders of Abreu or seniors Walsh, Zeke Marshall and Chauncey Gilliam. The Zips were able to produce such a season because of the work of all players on the team, the remarkable coaching of Keith Dambrot, and the support of the fans.

The team has shown a remarkable ability to recover from any type of adversity. Though they were unable to recover from the final dose, there is much for us to look forward to in the coming years. Despite what the casual basketball fan may think of Zips basketball after their devastating loss to VCU, we must remember there are few teams in the country that would have recovered from the loss of three players less than 14 hours before such a big game. Had this scenario played out on Michigan, Ohio State or Indiana, they likely would not have won their first game either.

Zips fans need to keep their eyes open and show up in force next year. We will be just as good as we were this year – perhaps even better.