Class assembles as it normally does. Students young and old enter through the doorway, heading to their rightful places in class. The instructor starts warm ups as usual: stretching poses followed by jumping jacks to loosen up their muscles. 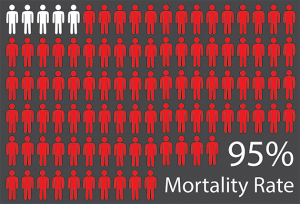 The class counts in Japanese while performing traditional karate kicks. Everything seems normal, until the intense fighting begins. The instructor’s heart starts racing out of control, until finally it stops, and the world around him does as well.

Brian Pendleton teaches Karate at the City of Cuyahoga Falls Natatorium. He is a black belt and has taught for the past 45 years. Not only is he a talented karate instructor, but he is also a professor of sociology at The University of Akron. He used to run, workout intensely and engage in impact fighting, but his heart no longer allows him to act like he did in his youthful days.

Pendleton suffered from sudden cardiac arrest. The nine-year anniversary of his near-death experience is on April 3.

“I was working out at the Natatorium at the time, teaching karate and fighting hard, when my heart just stopped,” Pendleton said. “I was lucky that Joe Fabick had just completed his CPR training a week before I fell.”

He was lucky to be at the right place at the right time. The City of Cuyahoga Falls Natatorium has a strict policy that requires all lifeguards to refresh their CPR training twice a month and all facility managers to train once monthly. Lifeguards are generally the first responders, but Joe Fabick was the facility manager that day. The real lifesaver was Fabick’s implementation of the AED – the automated external defibrillator.

It sounds bleak, and it is. Unlike most cardiac cases, Pendleton survived. He is part of the 5 percent. To break it down further, according to The University of Rochester Medical Center’s website (urmc.com), “an estimated 250,000 to 450,000 Americans suffer cardiac arrests each year.” Most die before ever receiving medical attention.

For Pendleton, it wasn’t a heart attack that he suffered, but rather ventricular fibrillation.

“The atria work with the ventricles. They pump together: push, pull, push, pull. The electrical current tells the ventricles to function. If there is an electrical malfunction, the heart doesn’t work in rhythm. They end up fighting against each other,” Pendleton said. “They think my heart rate may have hit 280 or 290. The heart just screws itself up and says ‘screw this,’ shuts down and stops. It can’t figure out what is going on. It’s all an electrical current, but what led to it is my back artery. It’s completely blocked.”

In addition to high blood pressure, his family has a history of high cholesterol. One of his arteries was completely blocked, but because he worked out so much, his capillaries formed a natural bypass — a corollary bypass. Though his rigorous physical activity may have saved his life, it was only a matter of time before something happened.

There were no warning signs for Pendleton because he couldn’t feel the pain many feel before having heart related problems. Pendleton said he had no carotid pain, arm pain, chest pain or jaw pain. Compared to a heart attack, cardiac arrest victims’ hearts stop pumping blood. The only way to start the heart back up is via an electrical current. This is one of the many reasons he advocates for organizations to purchase and learn to use AEDs.

The day began like any other. Pendleton was going to go for a run outside. His wife, Marcie, however urged him to workout at the Natatorium to avoid his allergy problems. It was almost as if she knew something was different about that day and her intuition kicked in. Because of his wife’s suggestion, he happened to be working out at one of the most trained facilities for CPR/AED.

When he came to class, something wasn’t right. Pendleton says he has no recollection of actually dying when his heart stopped, but remembers feeling dizzy and falling to the ground.

“They think I was dead before I hit the floor,” Pendleton said. “In class that day was a woman who was a cardiac care nurse; one of our green belts who works at City (hospital). We had the mother of one of our students who is a nurse at children’s hospital, and we had a dentist. All of them were well versed in CPR.”

Many people were there to help start CPR, and Joe Fabick came along when he heard cries for help. The AED was with him in the facility jump bag.

“I ended up turning blue. In fact, I was told I kind of looked like a smurf after a while,” Pendleton joked. While those near him started to perform CPR, Fabick hooked up the AED and waited for it gave instructions on what to do next.

To this day, Pendleton’s wife worries about what could have happened to him if he had gone somewhere else before teaching.

“I was scared to death,” she said. “Jerry’s wife called me and said ‘Brian’s down.’”

Jerry Andrea was the head karate instructor at the time. Marcie had no other information to go off of, but she hurried to the Natatorium, where she saw her husband being taken to the hospital; to her surprise, alive and awake.

“The CPR and the chest compressions kept me stable. It took about three minutes for them to get things up again. It took two big shocks from the AED,” Pendleton said. “I came around just as they were putting me on the gurney. Tom Taylor, who is one of our paramedics, who is also one of our black belts – I looked up at him and said, ‘Well hi Tom. Why weren’t you in karate today?’”

When Pendleton woke up, he wasn’t completely with it. Marcie had arrived at the Natatorium at the time they were leaving; Pendleton even commented on her appearance there.

Pendleton felt good enough to continue working out that evening.

“The cardiologist, who was the attendant that afternoon, asked me how I was doing. I felt good enough to challenge him to a stair climb,” he said. “I mean, I felt pretty good for what happened.”

While at the hospital, Pendleton received an intracranial cardiovascular defibrillator (ICD). This device works as a personal AED. It is hooked up to his heart and recognizes when the heart beats are too high or if his heart stops. When this happens, it then transmits a shock to the heart. Pendleton’s ICD has gone off just once.

“About a year after the event, I was working out more heavily than I should have, and my heart rate hit about 197,” Pendleton said. “And that’s when that puppy went off.”

Pendleton was at least glad to know that the device worked.

Adjusting to life after the incident wasn’t too difficult for Pendleton and his wife. They already ate well, but now they have cracked down on their food intake more strictly. Breakfast consists of yogurt while lunch is a bag of veggies, generally broccoli. Marcie says they eat a lot more fish and cabbage then they used to.

Every once in a while, the two will have a less healthy meal, dessert, or an alcoholic beverage of their choice, but it’s about 80/20, Pendleton said.

“Eighty percent of the time we eat healthy, twenty percent we can indulge,” he said.

When asked what he misses the most, his reply wasn’t food or drink. He misses the intense workouts.

“I love dripping in sweat and working out till you feel faint, like overcome by heat exhaustion,” he said.

“If you live,” Pendleton said, fighting back tears, “you begin wondering, ‘Why me?’ You know there are 14-year-old kids who die from this stuff and stay dead. And some live through it, but you begin to wonder, ‘Why me?’”

Although life will never be the same, he has learned one valuable lesson: Appreciate the time and the life we have.

Despite the incident that happened nine years ago, Pendleton and Marcie are thankful to wake to another day and see the other’s face lying next to them.