Living in a predominantly Christian nation, we sometimes forget that not everyone associates the fall of snow with Christmas, or the coming of spring with fish on Fridays.

As young adults, college is a great time to explore different religions, as we are exposed to people with different upbringings and ethnic backgrounds than the ones we were taught growing up. 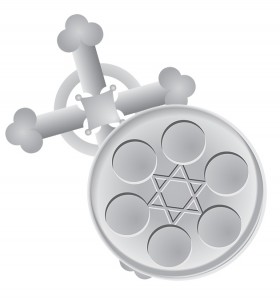 Maybe only one religion has been manifested to you, or perhaps there is an absence of any religion at all. This is the perfect time for you to educate yourself on what religion is truly synonymous with your own beliefs, or to help you determine what those beliefs actually are if you haven’t yet figured it out.

Rabbi Harold Kushner summed up his thoughts by quoting a professor of theology in his book, “To Life: A Celebration of Jewish Being and Thinking,” when stating, “He who knows only one religion doesn’t really know any.”

One of the best ways to begin your education on theology is to join a student organization here on campus; you can find one for almost any religion. You’ll find that the students and faculty members involved are excited to help and teach the 101’s about their religion, whatever it may be, and show you why they are so passionate about it.

The event consisted of a short service followed by a traditional Passover meal. Aside from the informative service and fabulous food, Jewish hosts were exceptionally welcoming and enthusiastic about sharing their culture and customs with attendees who were not so familiar with the Jewish faith.

Before the service began, student Gene Holston enlightened the guests on the history of Passover, sharing the story on what the holiday is really celebrating.

“Passover is the celebration of the Israelites being freed from slavery, with the help of Moses, from Egypt over 3,000 years ago,” said Holston.

Holston continued with a detailed biblical account on the 10 plagues that were brought to Egypt because of the Pharaoh’s refusal to free the Jewish people, such as the Nile River turning to blood, a locust swarm and the deaths of all first-born Egyptian male children.

While most people are used to the more Christian-based style of service in which guests listen to a minister of some sort preach, the Seder was a much more interactive experience in which everyone took part, highlighting the importance of community in the Jewish faith.

Everyone took turns reading from their Seder books, which include Biblical passages that tell the story of the Jewish people’s freedom from persecution.

“Seder is all about story-telling,” said Jacob Rosen, a development associate at Hillel Kent State.

There were also songs (some being in the Hebrew language), multiple toasts, and explanations of the objects on the Seder plates, as well as the story behind the famous matzo. When the Israelites were freed from Egypt, they left in such a hurry that they did not have time to let their dough rise, which is the reason matzo is eaten the week of Passover.

After the Seder portion is over (meaning “order”) Rosen explained that, “In Israel, Passover starts on Monday and lasts seven days. But if you are celebrating outside of Israel, it lasts eight days, from Monday to the following Tuesday, because you have to make up for not being in the Holy Land.”

As you would in any traditional Jewish Seder with family and friends, after the story telling, the food was served, which was one aspect at the event that non-Jews did not need any coaching for. The meal consisted of beef brisket, gefilte fish, matzo ball soup, roasted potatoes and other decadents, all being in the classic kosher style.

Sometimes it is easy to forget what a holiday is really celebrating because the real meaning is sometimes lost in all of the glitz, gifts and small things. However, members of Hillel proved that this is not an accurate portrayal of all people and religions.

The attendees showed what it truly means to celebrate a holiday and the importance of community, serving as a precise representation of members of the Jewish faith. In the two short hours of attendance, the guests were given not just a lesson on Passover, but Judaism, and shown first-hand what makes this faith stand out from others.

“Don’t look at Hillel as a Jewish organization, but more of a place to escape from school and if you want, to join an organization with great people,” said the president of UA’s Hillel chapter, Dylan Kretch.

Religion, although a touchy subject with some, is a great tool not only in a spiritual sense, but can offer you with networking opportunities, lifelong friends, family, and in general, a communal life across the globe. Our university can provide you with the connections for whatever religion sparks your interest: You just have to make the first step.