A short look at Zips softball 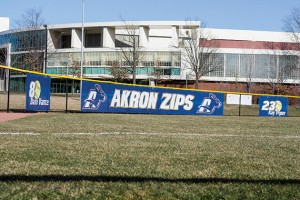 Though both Akron men’s and women’s basketball were wrapping up throughout the month of March, Zips softball has only wrapped up their second month of play.

The month of March has been a roller coaster for the Lady Zips, as they started the month off with a 5-1 start in the first 10 days. This winning streak was quick to dissipate as the Zips lost seven of their next 10 games, bringing the overall season record to 13-14.

Conference play began at the end of March, where the Zips currently stand at 2-2. Akron swept Buffalo 2-0, while going 0-2 against interstate rival Kent State.

Two Lady Zips had outstanding games while playing Buffalo; Jessica Schneider and Shawna Hochstetler both hit homeruns, which helped the Zips to defeat the Bulls 10-1.

Though Akron had two tough losses to rival Kent State, several Zips players have begun to stand out in the season. While playing Kent, sophomore Rachael Ratcliffe hit her sixth home run of the season, and freshman Erin Siler became the leading strike out pitcher in the MAC. The two-run homerun by Ratcliffe was not enough to overthrow Kent State’s lead in game two, though, and the Zips fell 5-3.