University of Akron students competed in billiards to claim honor, a trophy and bragging rights on Saturday.

Kacy Pugh and Zack Mckee won the pool championships for the women’s and men’s division held in the Student Union Game Room. 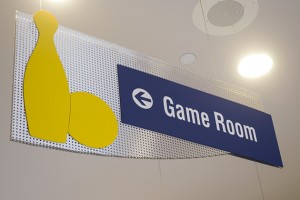 “In this game, like any other game, you need to have both luck and skill,” George Mansour, a sophomore computer information system student and competitor in the championship, said. “There’s a joke that goes around that says, ‘I’d rather be lucky than good, but if it was all out of luck, you wouldn’t see the same faces at the top each year.’ So there is a good mixture of skill and luck to
this game.”

The field was set with 18 men and eight women who participated in the billiard championship. Their prize would be a trophy and a plaque with their name in the Billiards Hall of Fame. The road to the championship stand went through a double elimination tournament- style bracket, with the competitors moving on by winning five games in nine- ball billiards.

Zack Mckee, a senior majoring in both engineering and mathematics, was not only the winner of Saturday’s tournament in the men’s division, but also the men’s winner in last year’s tournament. He said that when it comes to practicing he mostly goes over his drills and doing fundamentals to improve his game.

Mckee said he finds playing pool as an escape and an enhancer for his demanding majors.

“I have done projects that are related to pool and learning how to understand more of the concepts and physics of the game,” he said.

According to Beth Waltrip, the assistant director of student union operations, the tournament has been held at The University of Akron since the 1960s, when they hosted the championship at the old student union. It has taken some years off but has been held annually since the 1980s. This tournament is a part of the Association of College Union International (ACUI), in which students compete to go into a regional tournament and then to the national tournament. 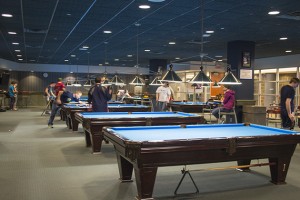 Mansour has been to both and place second in regional and ninth at nationals, this year he is hoping to place higher at nationals, while Pugh has competed for both several times and will go to nationals in Arizona to compete in June.

Pugh is a senior majoring in computer information system and got her start by just playing for fun with friends and family. She even took the billiards course to better her skill in the game.

“I began to put effort into the learning and the strategy to improve my game, and with the help of Tony Brown, the billiards professor here, it has helped improve my game,” Pugh said.

The one thing Pugh would like is more female billiards competitors.

“There is an extreme lack of participation on the female side, making advancing to nationals easier. I do look forward to nationals and the tough competition that it will bring though,” she said.

The players continued to say throughout the tournament that they would love to create an invitational for schools all around the Midwest and the South to attend, giving them another opportunity to compete and have fun. This idea is fairly new and has a lot of work to be done before this invitational becomes established, but the players are hoping that when this idea is established, it will be another great tournament with great competition.

“The University of Akron and the staff in the game room does a great job in supporting us through each tournament we compete in,” McKee said.