Roaming the University of Akron campus this week, you’ll be surprised by more than just the exceptionally warm, sunny weather and the emergence of short shorts and tank tops. A keen eye may notice an addition to some students’ spring weather wear: An empty gun holster. 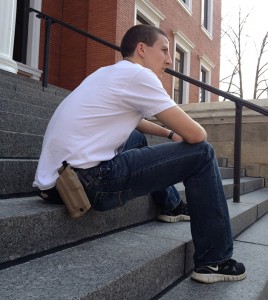 This week, students in support of concealed carry weapons on college campuses will wear empty gun holsters at their side in hopes to bring the discussion to the forefront, as well as educate people about the issue.

“[Openly carrying an empty holster] is just something to catch people’s attention,” Mansell said. “How many times can a college student see a flyer, posters, or get spammed with emails? College kids start to tune things out. It’s something physical that will catch people’s eye and catch them off guard. It allows us to start a conversation and get people’s minds going.”

Mansell will be wearing his empty holster at his right hip through Friday as he passes out flyers. Some flyers you’ll see throughout the week hold nothing back, dawning phrases like, “Attention Criminals: Gun Free Zone. All law-abiding faculty, staff, and students of this institution have been disarmed for your convenience,” or, “Gun Free Zone, because it worked so well at
Virginia Tech.”

Among others, Mansell will also be making himself available to answer the questions of students who are interested in learning the facts about concealed carry, gun control and the legislation that is affecting their constitutional right to bear arms.

“Basically we believe that campus is no different than anywhere else,” he said. “Campus is the same as the mall, or any other crowded public place that we have the right to carry a firearm through the second amendment. We’re not trying to change the law on who can carry, but where you can carry.” 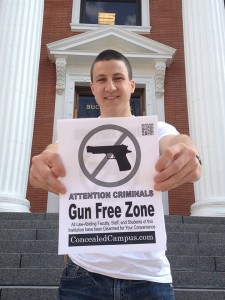 Mansell elaborated, saying that it is about his personal freedom.

“It’s my God-given right that I should be able to carry a firearm and whatever means necessary to protect myself,” he said.

According to Mansell, the main function of this protest is to dispel the common myths and misconceptions about concealed carry on college campuses, and to push state legislators and school administrators to grant concealed handgun license holders the same rights on college campuses that those licensees currently enjoy in most other unsecured locations.

“Really I’m just hoping to get people to look more into it,” Mansell said. “Most of those who are anti-gun or anti-concealed carry on campus don’t know much about it. They have their facts wrong, mostly.”

Mansell recently created Zips For Concealed Carry, which, as of Tuesday, April 9, is on its way to becoming an official organization with The University of Akron now that they have found a faculty advisor.

For more information on the Empty Holster Protest, visit concealedcampus.org.