The end of this semester is quickly approaching, but so is the next school year. If students are looking for a new place to rent, there are many things that normally get overlooked that can cause them problems. 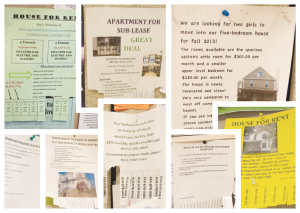 As mentioned in a previous article, Lynn Clark, lawyer and sociology professor at The University of Akron, advises to read your lease thoroughly, keep a copy of your housing inspection and have the contact information of your landlord.

One of her other major pieces of advice is to take your lease down to Off-Campus Student Services on the first floor of the Student Union before signing.

“Off-Campus Student Services is extremely helpful yet not very well known,” Clark said. “They will help you make sure everything in your lease is legal.”

Be sure to ask a lot of questions when you view the space you are renting.

“‘Can I have pets? What about overnight guests? And where do I get to park?’ are all simple things that if not brought up originally can cause large issues later,” Clark said.

She said that the simplest things can cause major disputes.

“I had a landlord fighting with his tenant about leaving his trashcans on the street too long and he threatened to charge him extra for it,” she said.

Clark also said that the house should be ready when the person renting the area moves in.

“If everything is not to the standard set by the lease and the landlord doesn’t fix it immediately, you can leave without it being considered breaking the lease,” Clark said.

She also said not to fall for the landlord trying to keep your safety deposit in a situation like this either. According to Clark, this is not allowed because the landlord did not hold up his or her end of the deal.

“It may sound like something trivial, but don’t pay to get the carpets cleaned when you move out; this is a cost of doing business and should be handled by the landlord,” she said.

Clark said that in one situation, a student moved into an apartment in which a previous tenant was still living. The student was placed into another room until the space was available. The student then left after finding a different and more expensive place to live.

“When the landlord sued the student for lost rent at the end of the year the student won because the room had not been ready for her as promised in the lease,” Clark said. “When you move in, everything should be ready for you and if not the landlord has to pay your moving fees, the difference in rent if you have to move to somewhere more expensive, and give you your safety deposit back.”

Clark added that many landlords around the university will place this in their lease and it is wrong to do so unless the person renting actually damages the carpet. She also said that if tenants want to learn more about the place they are moving into, they can talk to the City of Akron.

“A little known fact is that you can call the City of Akron (or any city) and ask for information on the house you’re moving into,” she said. “They will be able to tell you if the house has ever had mold or bugs such as termites.”

This is extremely important because even if the problems were taken care of before, they may return in the future.

Following these pieces of advice will make your transition to off-campus housing much smoother.