The Lady Zips had a difficult weekend as they went 1-4 over the weekend, dropping two games to undefeated conference opponent Ball State and splitting a series with Miami University 1-1. 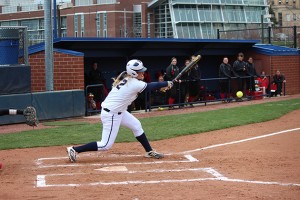 The Ball State Cardinals are currently undefeated in conference play, sitting at 12-0 and 28-11 on the season. The Zips had a golden opportunity to spoil the Cardinals’ run in game two on Friday, but they fell short in game two.

After going scoreless in game one – losing by a score of 5-0 – the Zips controlled the game two for six innings. By the bottom of the sixth, Akron led 6-4, but stumbled in the final two innings, losing by a final score of 11-6.

Kellie Roudabush gained her 13th run-batted-in (RBI) on the season when she smashed an up the center, single hit to center field, which brought in freshman Shawna Hochstetler for the score. The score, however, was not enough for the Zips to edge out the win.

The series between Akron and Miami was held on Friday and Saturday this past weekend, where the Zips destroyed the Redhawks 8-1 in game one and fell 7-6 in game two.

In game two of the series, Hochstetler had a fantastic game, going 3-4 from the plate and scoring three runs of her own. In conjunction with a homerun hit from Alissa Birkhimer, the Zips were able to rally back from an early deficit, but were unable to close the rally for a win. With the one win and three losses of the weekend, the Zips fall to 17-20 on the season, 4-8 in conference play, which places them in third from last in the conference standings.

The Lady Zips will be taking on Niagra at Niagra in a doubleheader Tuesday
afternoon, where they will be looking to add a couple of wins to recover the season.