Play takes a new perspective on the lives of Americans

How do white Americans deal with the struggles they are faced with? What happens when the unthinkable happens? “White People,” a play that was held at the None Too Fragile Theater, answered all of these questions and more. 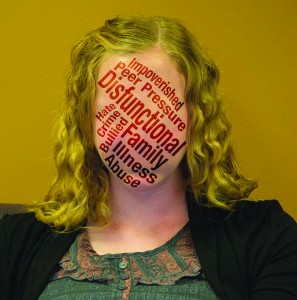 The strikingly real performance, directed by Sean Derry, takes a look into the lives of three ordinary yet troubled white Americans: Martin, Allen and Mara Lynn. These three are placed under the spotlight to tell the audience of their sacrifices, difficulties and heartaches of living a life they intended to be close to faultless. Distraught and shame is embedded into each of their voices as they share their confessions.

Actor Robert Branch said the play sheds light on a lot of things and he hopes gives the audience the opportunity to see themselves through
the characters.

Branch plays Martin, an attorney for a law firm in St. Louis. Martin has two kids, a daughter who is 12 and a son who is 15. He is deeply concerned with his son, who he says is detached from communicating with his father and constantly listening to music with violent and meaningless lyrics. Martin eventually confesses his son’s crime and questions the reasons for his behavior.

“I never do a play unless there’s some form of redemption,” Branch said.

Although the stage had limited space, it was used in a way that made the audience feel as if they were right in the midst of the moment. The stage split into three sections, each one occupied by one of the three characters set in a different place. Martin is set in a small office in St. Louis, Mara Lynn in a kitchen in North Carolina and Alan on a park bench in New York City.

Kelly Strand plays Mara Lynn, a former homecoming queen who is now a distressed housewife with a troubled marriage. She reveals the dark secrets of her life as well as the unfortunate medical problem her son has been diagnosed with. The audience visits her on the eve of her son’s surgery.

“It’s always exciting to be able to play a character and tell the story of someone who has such drastically different life experiences from my own and to be able to see life from a completely new perspective,” Strand said. “It’s rewarding to collaborate with a group of people who will help you shape and mold the character to effectively tell their story.”

Actor Michael Gatto hopes the audience can relate to one of the three characters and reflect on their own demeanor and prejudices towards others in society.

Gatto plays the character of Allen, a young professor in New York City battling with racist thoughts only after his wife was brutally beaten by black Americans. He takes his anger out through words on his favorite student, an African American girl named Felicia.

“I think this play is important because it deals with a relatable issue that impacts people of all ethnicities,” Gatto said. “The appeal is that it isn’t a soap-box editorial that says one race is evil or one race is inferior.”

The themes of this play are ones that are often unspoken about. Not only does it deal with racial issues in America, but also ideas such as the language we use, how we dress, how we raise our children and our personal roots. Branch says that he wants the audience to be honest with themselves and to “look truth in the eye.”

“I think the main theme of this play is that it is important to find a way to move forward in a positive light,” Gatto said. “Things will happen to you. Bad things. Events will test your resolve and thoroughly challenge your beliefs. We need to make sure these challenges don’t make us jaded and bitter. We can’t let the evil that lives in us all to come to the surface and dictate how we see others.”