Where the wild things explode

When do people lose faith in humanity? When does the naive thought that people are innately good go away?

Does it happen after the nice man promised you sweets and a puppy only to molest you and changed your life forever? Is it the day you come home from school and police tell you your parents died in a car accident? Does it happen to the mother whose four-year-old was mowed down in a drive by because you are too poor to move out of the ghetto? 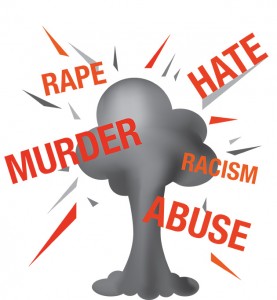 When do people stop believing in God? When does the idea of fate and everything happening for a reason fade into memories? Do you really believe little girls should be kidnapped and sold into sex slavery where they are repeatedly raped and forced to use drugs?

Was it destined for your mother to die a bitter, painful and drawn out death of cancer? Was it written in the stars that you were supposed to contract AIDS when that guy you really loved promised you he’d been tested and he would pull out anyway? That was all the night before he skipped town.

Do you think to yourself the end of the world must be near because human beings are such terrible creatures we won’t be able to make it much longer? When men and women who went to work one day and felt that jumping to their death was a better option than burning alive after a plane flew into their building, do you think sooner or later we’re all going to kill each other?

Or is it when people train for years to compete in a marathon only to be blown up at the finish line that you really get disgusted with humanity? How have human beings, with all of our technical advances and opposable thumbs and our ideas of time, money, God and love, become the number one killer of other human beings?

Is it easier to sleep at night when you think that kind of thing will never happen to you? But then you go to a movie with friends and leave in a body bag.

How we’ve all made it this far is a mystery. The fact that we all aren’t bunkered in our homes with automatic weapons on the ready, paranoid your neighbor is going to skin you and make a new apron to wear while they stew up your brains for dinner is actually impressive.

This isn’t an article against God or organized religion, it is simply a question. People can believe whatever they want to believe. And if you feel attacked and think I am trying to point a finger at your God, grow up. I’m sure a lot of people live their whole lives without ever really thinking about how the other half lives.

I don’t mean the other half as in poor people, or rich people, or white people, or children. I mean the half, or more, of people who live their lives affected by tragedy. It is amazing what a person can live through, often suffering in silence. The child of a rape whose mother hates him for looking like his father. The 16-year-old prostitute who is happier that at least it’s not her father taking her to bed anymore.

These things happen. People live through this, but often, they don’t. Souls die. Lights fade in the eyes. Hearts break. Mass tragedies aren’t the only downfalls of society. Ever heard of “paying it forward?” Don’t you think there is an opposite idea of that?

That little girl who was molested at the age of six became an alcoholic who killed a kid on a bike in a drunken fog. That little kid’s mother couldn’t take the pain of losing her child so she killed herself. That mother’s other child dealt with the pain of not being enough to keep his family together so he went and gunned down his classmates because if he wasn’t able to live a perfect life. No one could. And the stories can go on and on.

Will we ever see the day when people stop killing people? When babies stop having babies? Karl Marx thought of the perfect world, but it’s been deemed impossible. Until humans stop being selfish, there will only be more death, more disease, more blood, more pain, more sorrow. Until people learn how to be people, there will be another day like April 15 in Boston.

In the end, praying to Jesus Christ, Buddah, Jah, or the magical power of deer, we’re all going to die the same. I mean, not in the same way; clearly there are varying degrees of terrible when it comes to death. But evil knows no color, no sound, no emotion.

The person holding that evil inside may have their own opinions, but death is death. Murder is murder. Evil is evil. And yet life can be so many different, beautiful, wonderful things. Will people ever see the good in people? Will anyone ever be able to truly believe their brethren are good? I’ll probably die before I know for sure. And you will, too.