The Lady Zips softball team brought home a win Tuesday afternoon after defeating the Niagara Purple Eagles 4-1. The Zips were originally scheduled to face the Purple Eagles in a double-header Tuesday, but game one of the contest was delayed. This caused game two to be pushed back and eventually called in the fourth inning due to darkness. 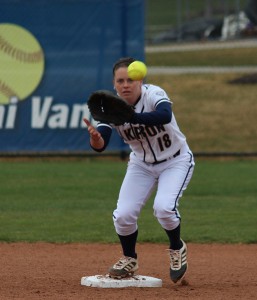 Akron defeated Niagara by being more efficient with hits, while the Purple Eagles outpaced the Zips 4-3 in hitting. Niagara scored only once on four hits while the Zips scored off of two hits.

Sophomore Rachel Ratcliffe achieved the only multiple-base hit of the evening on a double she hit in the fourth inning. Also achieving hits for the Zips were freshman McKenzi Rhodes and sophomore Taryn Allmon. Freshman pitcher Erin Seiler adds another win to her starting record with this victory over the Purple Eagles, making her record 12-13.

Due to game two being called in the fourth inning, the game does not officially count due to the lack of innings completed according to NCAA rules. As such, the Zips came home with a win after the matchup with Niagara and advance to 18-20 on the season.

The Zips return to Lee R. Jackson Field this weekend for a two game home-stand against the Ohio University Bobcats. Game one of the matchup will be held at 2:00 p.m. Saturday afternoon, and game two will begin at 1:00 p.m. on Sunday.

The Ohio Bobcats and the Akron Zips are currently tied in conference play, with a record of 4-8. These two games may play a significant role in the search for post-season tournament bids, as both teams are vying to stay out of the bottom of the conference. Three other Mid-American Conference teams are ranked equal or lower than Akron and Ohio; Toledo is tied with both teams at a 4-8 record, while Northern Illinois is 3-7 and Eastern Michigan is 1-9 respectively in conference play.