Students outside of South Hall Thursday evening might have been surprised when students started gathering and performing choreographed dance moves.

These students were from residence halls across campus and held a flash mob to songs including “Billie Jean” by Michael Jackson, “Lights” by Ellie Goulding, “Starships” by Nicki Minaj and “Yeah” by Usher. 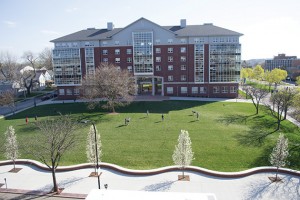 According to Tiffany Montgomery, the residence life coordinator of South hall and the coordinator for this flash mob, 55-60 students from residence halls including Honors Complex, Orr, Bulger, Spanton, Quaker, Exchange, Gallucci, Grant, South and Spicer were involved in the flash mob.

Montgomery said that she began planning the flash mob in March and she, along with her staff and hall government, practiced for two weeks before splitting off to teach the rest of the participants.

The flash mob was originally scheduled for last Tuesday, but was moved to Thursday due to the rain.

“I was very happy with the results,” Montgomery said.

Erica Maher was a part of the flash mob and was happy to work with Montgomery and South Hall.

“I thought it was fun, engaging and a great opportunity to allow the halls to work together,” Maher said. “It wasn’t like your ‘typical’ flash mob, but it was fun working with people we know and learning the dance.”

She said that what wasn’t so typical about it was the fact that it incorporated many residence halls and it was more of an event than a surprise.

“Although some people were surprised, a majority came to watch and support friends,” Maher said.

The event was sponsored by the Department of Residence Life and Housing and choreographed by Blayna Montgomery, the owner of Cloud Nine Dance Studio in Randolph, Ohio.