The 2013 NCAA soccer season will mark the third year since The University of Akron Zips men’s soccer team won the National Championship: And it will be the first without former head coach Caleb Porter. 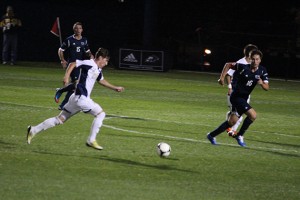 Under Porter, the Zips went 119-18-17 from 2006-2012, with six post season NCAA bids. The loss of Porter – who departed the Zips for a professional coaching job with the Portland Timbers – might normally be met with major concern. However, there may be little reason to worry about the 2013 season.

This past week, Zips athletics released the official 2013 schedule. In light of a pre-season record of 3-0, Zips fans have a lot to look forward to under new head coach Jared Embick. Here is a brief overview of the 2013 games, and predictions. The first nine games are featured in this issue; the last nine will be featured in Thursday’s issue.

The College of Charleston does not seem to be much of a threat to the Zips, even with all the post-2012 season roster and coaching changes. The Cougars went 9-11-1 last season and lack an elite goalkeeper. Zips win.

Furman University is a small private college of 2,700 students in South Carolina. There isn’t much to note about the school other than it has a financial endowment that greatly outweighs The University of Akron’s.

It is not likely that this small-town, Christian private school, will be able to defeat one of the NCAA’s elite programs. Zips win.

This is one of the teams Akron struggled with last year, the game ending up in a tie. It was one of three ties for the Zips last season, and out of all the games on this 2013 schedule, this is the one that should concern Zips fans the most. Akron will have to play St. John’s on their own turf. St. John’s has seen less pre-season roster and coaching changes than Akron has; I believe that this will play to their advantage. Zips lose.

The Rutgers Scarlet Knights are the last of the Zips’ opening road-trip games and stand as a possible mulligan game for the Zips. Though it looks like Akron should win on paper, these are always the games to watch out for. The Zips are 1-1 with the Scarlet Knights in overall match-ups, but if the Zips can score early and keep control of the ball, this should be another win for the Zips. Zips win.

The Rams may be a familiar name to most readers, because it is the very same Rams that thoroughly defeated Akron men’s basketball this year in the NCAA tournament 88-42. The Zips will be hosting the Rams this time around, but we should expect the outcome to be different in men’s soccer. The Rams went 12-3-5 last season and though they should be a tough opponent, they should be no match for the Zips.
Zips win.

The San Diego State Aztecs will be traveling over 1500 miles in order to play the Zips at FirstEnergy Stadium. The Zips did not lose a single game last season at home, and has only lost one game at home in the past four years. It isn’t likely that the Aztecs will be able to overcome the jet lag and pull off the win; the best they can hope for is a tie. Zips win.

Akron dominates the Mid-American Conference in men’s soccer, going undefeated in conference play 39-0-2 over the past seven years. Even with a coaching change for the Zips, it isn’t likely that a MAC team will defeat Akron this year. Zips win.

The Zips have a good running against the Buckeyes sitting at 25-6-3 overall, with Akron winning three of the last four matchups. OSU went 6-10-3 last season. Plus, with playing the Zips in Akron this season, it doesn’t seem likely that they’ll win this year.
Zips win.