The Zips were able to notch one win in a three game series against the Bowling Green Falcons, dropping the other two games. 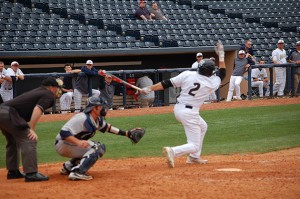 Akron traveled to Bowling Green Saturday for a double header to start off the series against
the Falcons.

After two fast runs made by the Falcons at the bottom of the first in game one, Akron would slash back at the top of the third with three runs of their own made by James Sheltrown, Daulton Mosbarger, and Matt Rembielak to bring the score to 3-2.

The Falcons would answer back in a devastating fashion in hopes of deflating the Zips. Bowling Green smashed to a total of nine runs at the bottom of the third to elevate the score to 3-11.

UA would continue to score some decent runs, but the nine runs made by Bowling Green at the bottom of the third proved to rip the energy from the Zips to make a comeback. Akron fell in game one to Bowling Green 6-14.

JT Brubaker was tagged with the loss as a result, bringing his season total to 0-7.

The Zips took to Stellar Field in game two hoping to respond better, but only found one run at the top of the seventh. Only receiving one score would not hand the Zips the win, as Bowling Green took game two 1-5.

John Valek was given the loss in game two, bringing his season total to 2-6.

Game three would prove to be something different, as Akron looked to prevent a three game sweep.

Akron was able to find its first score at the top of the second, as Cale Giddings returned to home plate after Matt Rembielak was walked with the bases loaded.

Matt Rembielak would come back at the top of the fourth to help his teammates. Off of a single to the right from Rembielak, James Sheltrown was able to find home plate to give the Zips the lead.

Akron would then seal the deal later on in the seventh when Matt LaRocca was able to drive to home plate off of a throwing error made by Bowling Green. That throwing error resulted in a loss for the Falcons, as Akron was able to rack up the win 7-3.