A special edition of Zipmail was sent out one week ago meant to clear up confusion about rumors of the Office of Multicultural Development.

“We have become aware of a lot of misinformation on campus about the Office of Multicultural Development (OMD),” the Zipmail said.

According to the Zipmail, OMD is expanding into two new offices, called The Multicultural Center and The Student Success Center.

However, many students, like senior Michael Davis, don’t see this as an expansion. They see this as the OMD closing its doors for good.

“The Office of Multicultural Development was designed to assist first generation, low income, underrepresented students,” Davis, a peer mentor for OMD, said. “We are simply stating that the university should leave OMD as it is now, because all of its academic services and programming are successful.”

It was because of this that Davis and over 100 other students held a peaceful protest outside of Buchtel Hall Tuesday afternoon.

The Zipmail described how these new divisions would be used.

To Davis, this move would instead leave The Multicultural Center for programming and The Student Success Center failing to support underrepresented students in their academics.

He also said that another problem with this plan is funding. With $26.7 million in debt, the students say that there is no room to establish this new center. 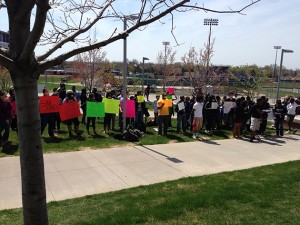 Jim Tressel, the vice president of strategic engagement, said that because of the new plans the university has to zero in on this debt, the university can reach this new goal.

“We must work harder and smarter in these challenging budget times,” he said.

In addition to the budget problems, Davis said the reasoning behind this new change is flawed.

“For example, the Student Success Center will have a ‘multicultural emphasis,’” Davis said. “So then why change the name, the job descriptions of the staff, etc.? When administration states that they want to make the OMD more inclusive, well, it already is. Most of the peer mentors within the office are white. OMD has black, white, Hispanic and Muslim students working there.”

Davis was involved in the African Male Learning Community through the OMD before being accepted into the UA Honors College. He is now the president of the Student African American Brotherhood and the political action director of the Pan African Student Organization. He cited the OMD for his success.

Bianca Gomez, another protester in Tuesday’s events, before becoming a peer mentor herself, she used the OMD’s services. She is now the president-elect of the Pan African Student Organization. She agreed that if the goal of the new centers are the same as the OMD, then it should stay as the OMD.

“What is the purpose of the name change?” Gomez said.

A release written by Lee Gill, associate vice president for inclusion and equity/chief diversity officer at UA, said that the name change to The Student Success Center will more accurately represent the mission of the department.

He also said that leadership of the OMD will not change as it switches to The Student Success Center and the same person who has been director will remain. As for The Multicultural Center, it will provide more programming opportunities to the minority population on campus.

“An associate director will be responsible to solely engage our African American students and organizations in co-curricular events that lead to leadership development, positive cultural experiences and academic achievement,” he said. “The newly proposed Multicultural Center (MC) will focus on providing broader intentional programming for our entire student population.”

According to Gill’s release, the Multicultural Center will report to him, as the OMD has been reporting to that office for the last five years.

Tressel said that the reason many students think that the OMD is closing is due to lack of communication.

Tressel said that the university recognizes that there is a diverse student population and that they have different needs that need to be met.

“Our goal is to most effectively meet them where they are, and serve all of them accordingly to the best of our ability,” he said. “With the combined efforts of everyone on our campus, we can and will do that.”

Fedearia Nicholson, Assistant Vice President of Student Success, said that it is important that the university continues
to promote student success to all students, respect all of the differences of students at UA and to meet the needs of the diverse student population. She also said that she thought the students handled themselves professionally at the protest.

Davis said that the protest against this change went well.

“We had a ton of support from several organizations and students of diverse backgrounds,” he said.

Davis hopes that instead of dividing the OMD, the university can expand the department so it can continue to reach a variety of students.

“Ultimately, we want students’ voices to be heard, and considered,” he said.

For more information about the OMD, visit uakron.edu/omd.