The University of Akron football team has been hard at work preparing for the spring practice game this Saturday.

The Zips are looking to improve after being a 1-11 team for three consecutive years. Though this may seem to be a difficult task, the Zips have been making fast improvements in the off season which they will turn into wins on the field. 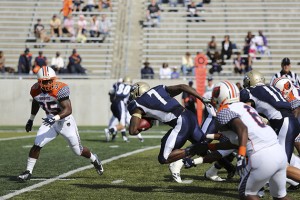 Last season the Zips were plagued with inconsistentcy in the defense. Before the season began, Akron lost star linebacker Brian Wagner as he transferred to Arizona. Also, during the season, the Zips faced injuries early on. These injuries force inexperienced underclassman into the play, which opposing teams often exploited.

One benefit of throwing many of the inexperienced players into the mix last season is that it has translated into success for the defense this off season.

Thus far in spring practice, the defense has largely dominated the offense, denying big plays and aggressively pursuing the quarterback.

Last year’s backup quarterback, Kyle Pohl, has been named the number one quarterback by head coach Terry Bowden. Bowden, however, has been unable to find a clear backup to Pohl, as a competition rages between other roster quarterbacks Dalton Easton, Steve Franco and Marcus Prather.

The Zips will play their annual spring game this Saturday at 1:00 p.m. at Infocision Stadium. It is free for all to attend.