This is a continuation of the hypothetical analysis of the 2013 men’s soccer schedule that was featured in the April 23 issue of the Buchtelite, titled “Men’s soccer 2013 schedule” Eight games were featured on Tuesday, with the last eight regular season games featured in today’s issue. To read Monday’s analysis, click here.

With the first nine games of the season out of the way, I have the Zips going strong with an 8-1 season start. Though many fans should expect the Zips to fare differently in the first post-Caleb Porter season, there is still considerable talent in this Zips squad: enough talent to be serious contenders for a post-season NCAA berth. 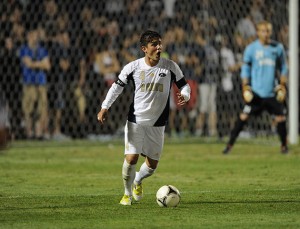 The second half of the season will be a testing ground for the Zips, as they will be playing several top-notch teams in the NCAA. Between the last publication and this one, the Zips fell to Butler University in the fourth pre-season game of the year, making their pre-season record 3-1. Though the pre-season doesn’t count toward anything official, it has exposed several weaknesses in the Zips that might become a problem if not rectified in the off season.

Hartwick
Hartwick is a Mid-American Conference opponent that posted a 5-10-2 record last season, with a 2-5 record in conference play. Understanding conference alignments outside of sports such as basketball and football can be a little confusing, but this is largely because most schools do not have a soccer team to field. Because of that, there are fewer teams to make conferences, and therefore Hartwick is part of the MAC in men’s soccer.
With all of this considered, Hartwick is still a small program that has yet to achieve the recruiting ability of other MAC programs –– let alone that of elite NCAA programs such as Akron’s. Last year the Zips destroyed Hartwick 4-0, and it isn’t likely that the 2013 outcome will be much different. Zips win.

Cleveland State
Cleveland State is the only team to defeat the Zips during their remarkable 2010 National Championship run. Since that game, however, the Zips have not lost to the Vikings, and it isn’t likely that they will catch Akron off guard again. Zips win.

Wake Forest
Last season the Wake Forest Deacons went 11-4-5 overall on the season. This might seem to some viewers to be a terrible record, but the Zips have struggled with Wake Forest in the past, and the Deacons are a regular competitor in the NCAA tournament. With the Zips losing several experienced players due to graduation and entering the National Soccer League draft, we should expect the Zips to lose several games this year. This Wake Forest team is a considerable threat, and it could become one that gets away. Zips lose.

Buffalo
The Zips haven’t faced any significant challenge from a MAC opponent in several years, and it isn’t likely that Buffalo will be able to muster what it needs to defeat the Zips. Zips win.

Michigan State
The Michigan State Spartans went 12-10-1 last season, losing each of their games against top opponents. The Zips, on the other hand, either won or tied most of their games last year against top opponents, and had a significantly more difficult overall schedule. Though the Zips have a slightly easier schedule this year than last, it isn’t likely that the Zips will fall asleep against the Spartans.
Zips win.

Northern Illinois
MAC teams don’t pose much of a threat to the Zips this season, and Northern Illinois is no exception. The Huskies went 4-2-1 in conference play and 7-10-3 overall in the season. Their greatest note on the season was that they held the Zips scoreless for 73 minutes, where they ended up losing 2-0. This year will not be the year that the Huskies overcome the MAC juggernaut. Zips win.

Michigan
The Michigan Wolverines lost at home in Ann Arbor to the Zips last season. In 2013, the Wolverines will be traveling to Akron, where they will be looking to upset the Zips. Michigan tallied 1.36 goals per game on average, while Akron tallied an average of 2.1. Conventional wisdom in sports is to give the home team the advantage in most matchups: And this wisdom will likely ring true. Zips win.

Penn State
The Nittany Lions have seen considerable adversity in the past year when it comes to their sports teams. Their basketball team fell well below .500 on the season, their football program was marred with controversy and their soccer team went 9-5-3 on the season. Though this is a relatively respectable record, the Nittany Lions lacked any significant wins during the season, and the Zips shouldn’t have much trouble beating them on their own turf. Zips win.

Western Michigan
The best way for the Zips to finish the season is with a final match-up against a fellow MAC team. Akron has a considerably good track record against conference teams, making it highly likely that the Zips will finish with a win in the season finale. Zips win.