Imagine balancing being a full time student, an athlete, a coach, and having a part-time job.

This is a reality for Patsy Ford, a junior studying mechanical engineering. Ford is passionate about women’s rugby. She has been playing for six years and this year she became the assistant coach for The Lady Buzzards Rugby team. 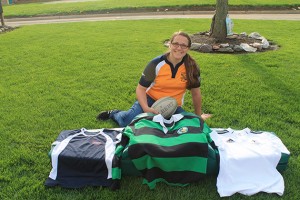 “Balance is a huge goal in my life that I’m constantly working towards. It’s really hard but I couldn’t see myself giving up on any of these,” said Ford.

Ford explained that many people compare rugby to soccer and football, only in rugby there is very little protection.

“It’s a continuous contact sport where the only mandatory protection is a mouth guard.

To score, you have to actually touch the ball to the ground in the try-zone (comparable to an end zone) which is worth five points. Then, the conversion kick is worth two points and has to be kicked in line with where the try was touched down. This is where football gets the saying ‘touchdown’ from,” said Ford.

There are many things that are rewarding when coaching: especially when the team has little rugby experience.

“When they understand the game it’s because I have properly prepared them. It’s just so awesome seeing them play well because of what I taught them,” said Ford.

Ford became hooked on rugby in high school and believes rugby will be a large part of her life until, according to her, her body falls apart. Travelling as far as California to play in a game can attest to Ford’s dedication to the sport. She has also played and won the national title in 2011. She currently plays on Akron Women’s Rugby team. This team is not associated with the university; it is a club team.

Women are always welcome to join at any time. The current team members are patient and willing to show new girls the ropes.

For more information about the women’s Akron rugby team, check out akronrugby.com.