The Akron Zips football team took to the field Saturday afternoon in the annual spring game, where the blue squad defeated the white squad 16-7 at Infocision Stadium.

Redshirt sophomore quarterback, Kyle Pohl, and the first string offense showed incredible improvement over this time last year; Pohl has led the blue squad offense with confidence and precision for the majority of the spring game. 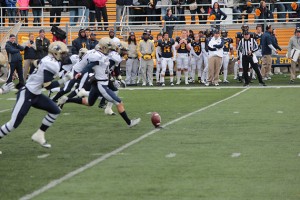 Pohl was 16-24 for 144 yards passing with one touchdown on the afternoon. While Pohl looked confident during the practice, backup quarterbacks Dalton Easton, Steve Franco, Curtis Watson and Marcus Prather all lacked in production as they competed for a secondary role. Franco was injured during the scrimmage after throwing an interception and connecting on only one or two passes on the day.

Easton showed considerable spark over other back-up contenders, but his stats on the day show a possible problem as backup quarterback. Easton went 7-16 for 51 yards with two interceptions and no touchdowns.

Pohl’s game was not flawless, as he was sacked three times during the practice. These sacks can be attributed to holes in the offensive line, as offensive tackle Jarrod Pughsley was absent from Saturday’s spring game due to injury. The Zips are also expecting several NCAA Division I transfers to help contribute to the stability of the offensive line.

Zips running back Jawon Chisholm continued to shine in spring practice as he led the Zips receivers with five receptions for 35 yards and 42 yards rushing on nine attempts. Freshman running back D.J. Jones also impressed spectators as he gained 53 yards on 11 attempts.

One of the more impressive feats for the Zips during the afternoon were two 50-plus yard field goals made by kicker Robert Stein, the longest of which was from 58 yards to end the first half. These two long-range shots, however, were slightly overshadowed by a missed 38 yard attempt in the second half. Stein is showing considerable improvement since the close of last season where his career long was of 47 yards.