Zips athletics: a year in review

The end of the 2012-13 school year is on the horizon as graduation lingers for a select group of us. Over the last four years I have had the opportunity to cover a variety of teams here at UA, highlighted by the men’s basketball and football teams.

While the athletic department as a whole continues to build on past successes, it proved to be a roller coaster-like year for the Zips’ most highly-touted programs. This trend unfortunately did not start out slowly. 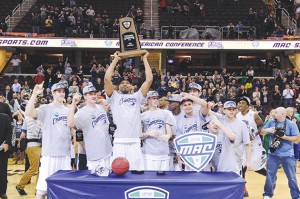 On Aug. 29, during the first week of the academic year, men’s soccer head coach Caleb Porter announced that would be leaving Akron after the 2012 season for the Portland Timbers of Major League Soccer. The team responded, becoming the number one team in the nation heading into the postseason. Despite their ranking, the Zips earned a No. 5 seed in the NCAA Tournament and Porter departed from Akron after a loss in the sweet sixteen.

A renewed hype surrounded the football program after a coaching change landed Terry Bowden on the sidelines. While philosophies changed, the results stayed the same. A third straight 1-11 season and zero Football Bowl Series (FBS) wins made the Zips one of the worst teams in college football.

A dream season for Keith Dambrot and the men’s basketball team came to a sudden end in the first round of the NCAA tournament after an 88-42 loss to Virginia Commonwealth University. The loss of Quincy Diggs and a clerical error that sat out Demetrius Treadwell and Nick Harney for three games were overshadowed by Alex Abreu’s arrest in early March.

It was not all bad for the Zips this year.

The women’s basketball team won 23 games – the most in its history – as they reached their first MAC Championship game.

Hashtag-inspired jerseys brought national attention to the men’s basketball squad in the middle of the longest win streak in the nation.

Men’s soccer hired internally, promoting Jared Embick to head coach, who will have another strong recruiting class this fall to keep the winning tradition alive.

The rollercoaster seemed to never stop.

While 2012-13 was a year of monumental gains and setbacks, few things have given pride in my school throughout my college career the way athletics do. I can definitively say that I will be a fan for life. Go Zips!