Talented high school students from around the Akron area once again amalgamate for the second Akron All-City Musical, which will be performed at the Akron Civic Theatre in June.

Last year, thousands came to see these performing arts students from high schools such as Copley, St. Vincent-St. Mary, Firestone, Garfield, Akron Early College High School and many more perform the famous, award-winning “Hairspray.” This year, some of the same students as well as a handful of newbies auditioned and are now rehearsing for the upcoming musical, “Ragtime.”

“Ragtime” is a Tony award-winning musical, based off the novel by E.L. Doctorow that takes place in the early 20th century. The plot revolves around the lives of three very different persons who represent a specific group of people of that era. The character Coalhouse Walker Jr., a Harlem musician, represents the African-American community. Mother, the head of an upper-class household, represents the well-to-do of the era. And Tateh, an immigrant from Latvia, represents first-generation immigrants. The show also features major historical figures such as Henry Ford, Booker T. Washington, Evelyn Nesbit and Emma Goldman.
Provoking the audience with its dramatic music and emotional appeal, Ragtime is a show that is designed to fill the eyes of the viewers with tears and provide an inspiring message that is timeless. 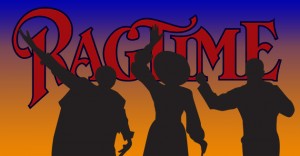 As the lives of the three main characters start to unfold and the plot thickens, the audience will be exposed to death, love, discrimination and a combination of other real-life situations that evoke a sense of reflection in the audience.

“‘Ragtime’ is like ‘Hairspray’ in that it shares a message of overcoming discrimination and hate,” said Mark Zimmerman, the director of the show and teacher at Firestone High School. Many of his students are featured in the show as a part of an ensemble and portraying main characters.

“However, it’s drastically different in that it is far more dramatic than comedic. The show focuses more on the music as the method of reaching out to the audience,” said Zimmerman.

The cast started rehearsing for “Ragtime” this past Sunday and the students are already getting excited for the show. As the cast sang together for the first time, it was hard to tell that it was their first time singing together. The voices harmonized almost instantly and as the melodies flowed on, the image of a successful show filled their minds.

“I expect to be absolutely blown away by this group of students,” said Zimmerman. “This show is very musically emotional and focuses a lot on vocal performance. This cast is going to ‘bring it’ in terms of hitting the vocals right on the spot.”

The show features
many recurring students who starred in “Hairspray” last year, such as Kay Caprez, and senior at Our Lady of the Elms High School. Caprez was the lead in last year’s musical, playing Tracy Turnblad, the empowered female who fights for the rights of African-Americans in Baltimore.

“I’m really excited to perform with an entire new cast this year,” said Caprez. “I’m also really excited to be portraying Emma Goldman. She’s such a strong female who fights for what she believes is right, and in many ways she’s similar to Tracy Turnblad. Goldman’s tactics are drastically different though. She’s a lot stronger and dramatic, and I like her accent.”

Hallie Heffernan, a sophomore at Copley High School and avid dancer, returns this year as Evelyn Nesbit, a teenage, early 19th century version of a heartthrob who was a famous actress and model.

“My character acts like everything is just a show and is way overdramatic,” said Heffernan.

The enthusiasm amongst the teens in the show is evident upon their faces and in their attitudes. Under the direction of Zimmerman, they hope to make this show even bigger than last year’s.

“I feel like, since people came to see ‘Hairspray’ last year and loved it, that there will be an even bigger audience this year; so we need to step it up and wow them so they keep coming year after year,” said Heffernan. “The plot will help us, too. It’s a lot heavier than last year and presents a more powerful message.”

Zimmerman says that the musicals won’t stop and plans to continue the All-City Musical program so that it becomes a tradition in the City of Akron.

“I want to showcase the talents of the students in Akron,” said Zimmerman. “I want to combine the strengths of these teenage dancers, actors and singers and also provide an opportunity for them to learn from one another so they can become stronger. The way of delivery of the message in this show is different than last year’s, and I believe the cast will captivate the audience.”