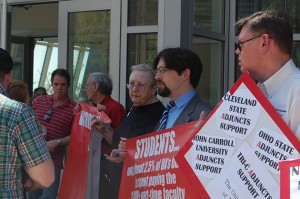 “The university would like the public to believe, and adjuncts to believe, that the reason that they can’t do anything about their compensation is because they’re running in a deficit,” said Matt Williams, vice president of New Faculty Ohio. “They use the current state of the budget as a scapegoat for not providing a living wage to part-time faculty.”

As the Buchtelite reported on Monday, The University of Akron has adopted measures to avoid the potential cost of the Affordable Care Act. These measures limit part-time faculty to less than thirty hours a week in order to avoid the projected $4 million cost of complying with the act.

According to Matt Williams and the OPFTA, part-time faculty have already seen a 32 percent decrease in compensation over the past 18 years relative to inflation. 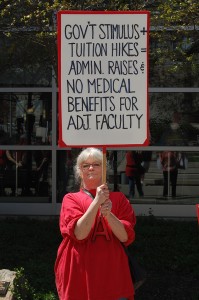 Officials at The University of Akron confirm the numbers reported by OPFTA, however caution their context.

“There is no comparing the rates from 1997 to today,” said university officials Eileen Korey and Laura Massie.

“The buzz word around campus is this idea of universal accountability…when is senior administration going to give up their compensation? [When] are they going to take on the same burden that faculty have been shouldering over the last thirty years?” said Williams.

The University of Akron declined to comment on decision-making efforts; however, Eileen Korey did respond to concerns over the terminology of Universal Accountability.

“Our Provost Mike Sherman has been using the phrase Universal Accountability to describe what is expected of all of us across the campus, as we are all responsible for student success.” Korey said.

In a presentation given by Provost Sherman to the Board of Trustees, Universal Accountability for Student Success was defined as a plan to make the entire campus accountable for student success and achievement; from Admissions to New Student Orientation, the individual colleges and Administration.

Williams and the OPFTA maintain that they believe the best way to raise graduation rates are by paying contingent faculty a living wage.