Every year after the National Football League (NFL) draft, there is a period of signing undrafted free agents who were not drafted during the seven rounds of the regular draft. Though none of the graduating Akron Zips were drafted in the seven rounds of the draft, there were two players who were picked up in the free-agent period over the weekend. 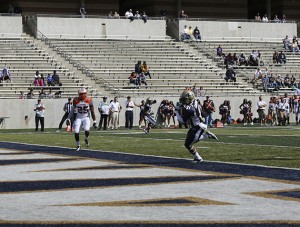 Undrafted free agents do not usually have a long shelf life in the NFL. However, are there the occasional undrafted free agents that become stars. Cleveland Browns fan-favorite, Joshua Cribbs, was a quarterback for Kent State University who was signed to the Browns as a free-agent. Cribbs competed for a starting job and won the position.

The last quarterback from the Zips to be signed as an undrafted free agent was Luke Getsy in 2007, who was signed by the San Francisco 49ers. Getsy was the quarterback who led the Zips to their first ever –– and only –– football Mid-American Championship victory in 2005.

A famous undrafted free agent who has made a successful football career is current Cowboys quarterback, Tony Romo. Romo went undrafted in the 2003 NFL draft and was signed by the Cowboys that same year; he soon replaced the starting quarterback. Since then, Romo has been a three time Pro Bowl selection and has started every season for the Cowboys since.

Things might be looking up for the Zips as their players slowly get noticed in the NFL.