The world should be “Tuning In”

Composer/lyricist Larry Kass, a doctor who specializes in hematopathology and a professor at the Case Western Reserve University School of Medicine, had a dream to compose a musical and see it come to life on stage.

Kass began working on the musical “Tuning In” as a labor of love for his wife Sara in 2005.

“Sara is the inspiration for all the music I write,” Kass said. “She is my great passion in addition to music and medicine.” 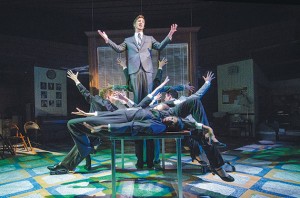 And there was no stopping Kass. He was determined to make his dream a reality.

“I sat down on a Monday and wrote 25 songs in one week,” Kass said. “It was a frenzy of creative activity.”

On Aug. 8, Kass, with Sara by his side, watched his musical “Tuning In” take the stage in its world premiere at E.J.Thomas Hall. The show featured a 14-piece orchestra and a cast of Equity, community and student actors, singers and dancers.

Kass transports audiences back in time to 1976 to a nostalgic radio station housed in a retirement village staffed by residents, college students and volunteers.

The radio station’s stability is threatened when the retirement community’s new administrator decides to change the format from nostalgia to talk radio and soft rock.

Rather than accept the changes and fight for the station they love, the residents decide to present a musical “radio-thon” in hopes of generating enough funds to preserve the station, its musical heritage and their extended family.

All of the action takes place within a span of one week.

The performance was a success on many levels, but arguably one of the most unique and rare aspects of the production was the collaboration between The University of Akron’s School of Dance, Theatre and Arts Administration and the School of Music. 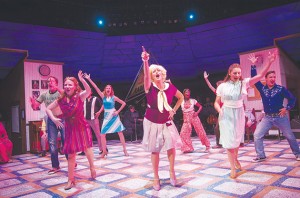 “This has been an amazing experience,” Caldwell said. “The amount of talent in this show is mind-blowing. Honestly I think that it is something that needs to happen more often. Sometimes collaborations are hard between our departments. This has been fantastic and I just hope that this is going to pave the way for more collaborations like this in the future. I think the students will really benefit from experiences like this.”

Caldwell said she enjoyed the opportunity of working with Musical Director Terry LaBolt and Director and Choreographer George Pinney.

“Working with George and Terry has been an incredible experience,” Caldwell said. “Terry is a gentleman in the highest regard. He is just a beacon of light and positivity.”

Caldwell directs productions for UA’s theater program and is going to apply what she learned from Pinney in her own productions.

“I have learned from watching George the kind of director that I want to be,” Caldwell said. “He is really good at letting actors make their own choices and will talk to the actors one-on-one instead of addressing them in front of the whole cast. There is something to be said about that and I want to try to do that more in my directing.”

Jack Schantz, an associate professor in music at UA, hopes that his students take away a sense of what it is like to work in big world outside of school.

“This is how it is done,” Schantz said. “We are not kidding around, we are serious about what we are doing here. If you want to be in this business as a musician, you have to be willing to do this kind of work. This is not just a college production, this is a big deal.”

It was evident from the powerful music, the vibrant costumes, the stellar lighting and acting that a lot of love went into this show.

“I have been doing these kinds of collaborations for 15 years,” Schantz said. “I think this is what we should be doing. Music, art, drama and dance should all be working together to promote productions and to do live shows like this. It is difficult because everyone has their own priorities and cross-pollinating genres like this is difficult because you have to step out of your comfort zone and do things that you are not comfortable with and work with people that you are not used to working with.”