The road to cheerleading nationals

During the football and basketball seasons, fans get to see the tamer aspect of cheerleading. Where the cheers and stunts seem effortless, the team’s enthusiasm is tenfold. What remains unseen is the grueling hours of practice, the competitions and the dedication behind it all.

“I don’t think people really understand the physical endurance, the strength and the mindset you need to be a cheerleader,” cheerleader Kaitlynn Stowe said. “They think we just wave our pom-poms around and look pretty. But it’s not just a pretty face, we spend days and hours in the gym. It’s a lot of passion and technique that you have to put into it and it takes time.” 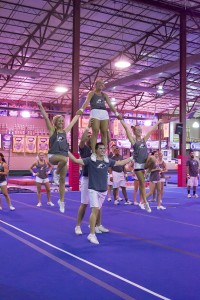 The team usually practices two to three times a week for 9 to 10 hours on top of games and appearances. During the summer they also attend camp and begin practices as the school year approaches. It’s also important that they stick to a workout regimen and eat healthy in order to maintain their weight and keep up their stamina year round.

“I believe it’s more of a challenging sport because along with having strength and endurance, you also need great flexibility and dexterity,” cheerleader Amy Kania said. “Other sports throw, kick and pass five-pound balls. We do the same only using 100-plus pound people. One misplaced arm or leg and you could find yourself with a serious injury.”

According to the United States Sports Academy in 2011, cheerleading was the No. 1 cause of catastrophic injuries in women’s sports and ranked No. 2 in catastro-phic injuries among all sports in America.

“It’s pretty dangerous compared to other college sports,” John Andrews, a team member of three years, said. “There are a lot of high-risk stunts and everything we do needs to have technique to avoid injuries. It’s really hard to find a balance between learning and keeping our bodies safe. We don’t just ‘miss a basket,’ we risk broken bones.”

Mostly supported by male spotters and bases, the girls are also stacked every which way, sometimes three or more cheerleaders high. This is how pyramids and similar tricks are completed.  The cheerleaders are also tossed in the air, sometimes at hazardous heights, where they can complete a number of tricks and stunts.

“This sport is really about trust because you are letting people throw you up in the air,” Stowe said. “You’re giving your body to that guy underneath you and you have to trust him with all you got.”

The team must work together flawlessly in order to avoid injury. They have to communicate and work on accuracy to lessen the amount of injuries on the team. One way they complete the goals is by creating a strong dynamic between the teammates.

“This year is my favorite year so far,” Andrews said. “I think we just motivate each other so much and we work really well together.”

The Cheer Team must not only think of themselves, but their teammates as well. They support each other in many different ways that helps improve the team as a whole.

“There’s friendly competition,” Kania said. “For example, one stunt couple will hit a new stunt, which makes another couple want to also get that skill. In skills like tumbling we motivate each other at practices by cheering each other on and clapping and reassuring one another that we can do it. We are very encouraging of each other on and off the field.” 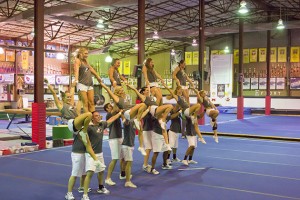 The Cheer Team’s support and love for one another doesn’t just stop when their cheer commitments end for the day.

“This year is probably the closet year we’ve had,” cheerleader Jeff Swenson said. “The chemistry between everyone is great. We have a lot of bonding activates outside of cheerleading. We all love hanging out with each other. It’s a really great team this year.”

The Life of a UA Cheerleader

If it’s not the dangerous and challenging stunts or the encouraging teamwork that should earn them respect, it’s the hard work they put in every day as well. Each May, tryouts are held not only for newcomers, but for the former cheerleaders as well. Tryouts are usually three days long, testing the competitors on all different levels and aspects
of cheerleading.

“In a cheerleader, I look for enthusiasm more than skill,” coach Brook Shearer said. “It’s just being able to get the crowd involved. That’s what cheerleading’s about. It’s not about all the flips and stunting, you’re here for the other teams.”

When the school year begins, the team members must work around their cheer schedule to take a certain amount of classes. Many of them have to juggle jobs and other commitments with cheerleading, as well as maintain a good GPA. In the fall, they practice twice a week and attend football games regularly. In the spring, as nationals approach, they practice three times a week and attend all of the basketball games.

“For football games, it’s pretty much an all-day thing,” Swenson said. “We show up three hours before kickoff and we start with warming up and running what we are going to do for the game. About an hour and a half before the game, we go to Zips Fest and we mingle with other people. We talk to them in our uniforms and get them pumped up and do a couple cheers. Forty-five minutes before the football team comes in, we will go line up and do a little tunnel for them, a cheer and the fight song. And then the game starts.”

The Cheer Team is there for the crowd just as much as they are for the team they’re cheering for.

This summer, the team competed at a camp hosted by the National Cheerleading Association in hopes of qualifying for nationals.

“We performed a routine and our game day sideline, and we got first place this year,” Kania said. “We got a silver bid, which means they [the NSA] pay for part of it, for us to go to Nationals.” 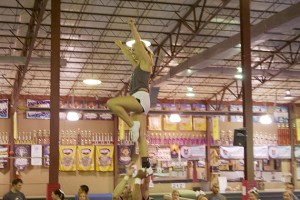 Because of the bid they received, for the first time in three years, The University of Akron’s Cheer Team will be going to compete at nationals. There, they will compete against the best collegiate cheerleading teams in the country.

The next few months leading up to nationals will be filled with rehearsals. The team will work together on every detail of their new routine so they are ready to face their competition.

“I’m hoping to make it to nationals and hit a perfect routine,” Andrews said. “I’m not worried about placement, I just want a mistake-free performance for my team. Taking the stage at nationals will be a perfect ending to my long and very fulfilling career as a cheerleader.”