The University of Akron’s football team has been hard 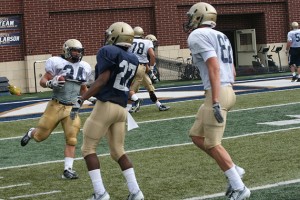 at work preparing for the football season. To all those who have watched fall practices this season, there is only one word to describe this fall’s team: exciting.

After going 1-11 last year, the Zips have been extremely active in the offseason, adding much needed depth to the team, which relied heavily on young players last year. Over the summer, the Zips have added six transfers to the 2013 class: defensive linemen Nordly Capi and C.J. James, defensive tackle Moses McCray, offensive linemen Henry Orelus and Joe McNamara, and quarterback Nick Hirschman.

Transfer students are not the only changes that can be seen on the field for the Zips this season. Head coach Terry Bowden has not only added speed and activity to the Zips, but he has added them to his own life by shaving 50 pounds in the offseason.

The most disappointing part of the 2012 season was the defense. Bowden’s first year revitalized offensive play, but the lack of depth on defense greatly contributed to losses last year against Florida International and Miami University.

Throughout the offseason, the Zips’ defense has been showing speed and versatility.  Sophomore linebacker Jatavis Brown has been a welcome surprise, showing speed moving across the field as well as the ability to create turnovers.

The defensive line appears to have added much needed talent and depth, which will hopefully lead to a more productive and reliable unit on game days. The Zips have seen outstanding competition from defensive ends James, Capi and Albert Presley. Remember each of these names for you are likely to hear them often throughout the season.

Looking to the Future

The addition of transfer players for the 2013 season is not the only building the team has done in the offseason. The Zips have also been extremely active in recruiting for the 2014 season, which has been spearheaded by offensive coordinator A.J. Milwee.

As of this publication, the Zips have six confirmed recruits for the class of 2014. Topping the charts is Beaver Falls, Pa. quarterback Chandler Kincade who has committed to Akron over offers from Pittsburgh, Rutgers and Temple, according to reports from ESPN.com and Rivals.com. Kincade is a three-star recruit and is ranked as the No. 25 player at his position as a pocket passer, according to Rivals.com.

The Zips have also added defensive end Se’Von Pittman, who is transferring from The Ohio State University and will have three years of eligibility left starting in the 2014 season. Pittman was rated as a four-star recruit out of high school and looks to be another strong addition to the Zips defense, which lacked maturity and depth merely a season ago.